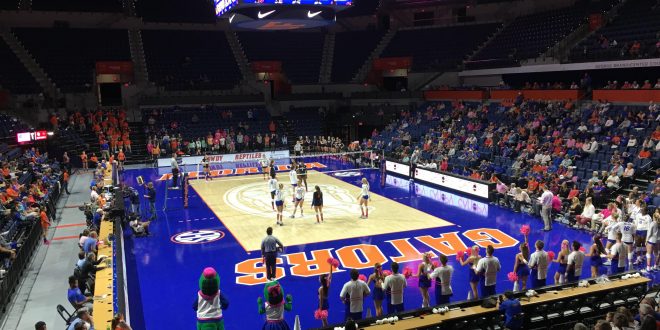 The Mississippi Bulldogs will have to continue to wait for their first win against Florida.

The No. 4 Gators had their way with the Bulldogs as they won in three sets. Sophomore Rachael Kramer had a dominating performance as she had 14 points which included four blocks. Florida once again ended a match with double-digit blocks as they finished with 11.

Shainah Joseph who played a huge role in Friday nights victory over South Carolina finished third on the team in points with eight. Rhamat Alhassan continued being one of the most versatile players on the Gators roster. Alhassan finished with a team-high six blocks on the day. This past Monday the Senior was named the SEC defensive player of the week.

At one point in the game, the Gators served nine straight times thanks to a great performance by Caroline ‘CK’ Knop. That sequence helped Florida take over the game.

Wise said that Knop was excellent with her serves today because she was able to mix it up and keep the Bulldogs on their toes.

Snyder Getting The Job Done

Carli Snyder leads the SEC in aces per set (0.52) but that wasn’t her biggest contribution of the day. The senior had a team-high 17 digs Sunday afternoon. Not only was she important to stopping the Bulldogs attack but she was also the Gators second leading scorer with nine points.

Head coach Mary Wise said that the 17 digs do not surprise her because Snyder is seeing the game in slow motion.

Florida now prepares for what will probably be the biggest SEC game of the season. The Gators have a road match-up against No. 8 Kentucky on Wednesday. Wise says she expects a record crowd in Lexington on Wednesday night.

The match between the two top ten teams will begin at 7 p.m. from the Memorial Coliseum.