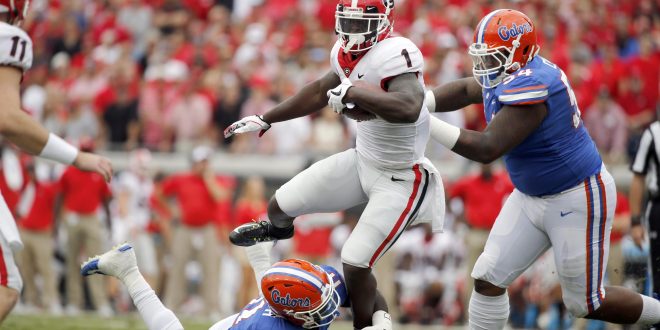 JACKSONVILLE, Fla.–The Bulldogs scored on their first three possessions and led 21-0 before the Gators crossed the 50-yard line. Even uglier, Georgia did all of this before Florida even converted a first down. Georgia used three huge plays to build an early three-touchdown lead. 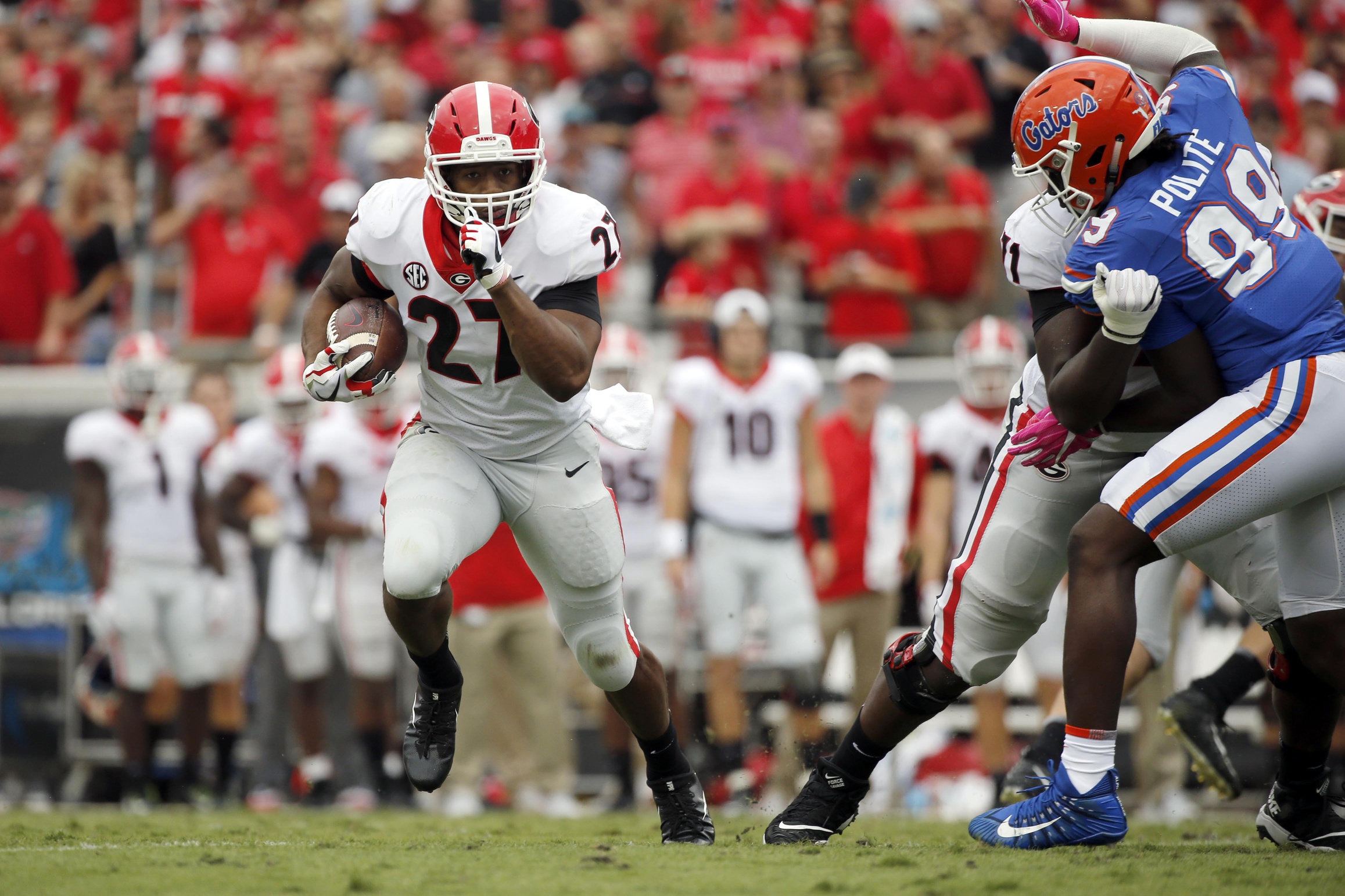 several defenders and then made it into the end zone. That recap was the outcome of the Dawgs’ opening drive.

By the look of things early on, Florida fans knew the beating was on, and the winning streak had come to an end.

Michel completed his night with 137 yards rushing on just six carries. Georgia other explosive running back, Nick Chubb, had 13 carries for 77 yards. It was like someone let the Bulldogs off the leash at EverBank stadium. Georgia finished their all-day rushing attack with 292 total yards on the ground. Freshman quarterback sensation, Jake Fromm, completed only four passes for a total of 101 yards in the air. Georgia did not need to entertain a passing game because they handled their business all on the ground.

And then there was Florida, on the other hand.

It was all Georgia for four quarters.

Florida tipped off the day by responding to a tweet from a sports lawyer who said Florida and head coach Jim McElwain’s agent, Jimmy Sexton, have engaged in buyout negotiations and are “miles apart.” Athletic director Scott Stricklin released a statement several hours before the game saying the report was inaccurate. 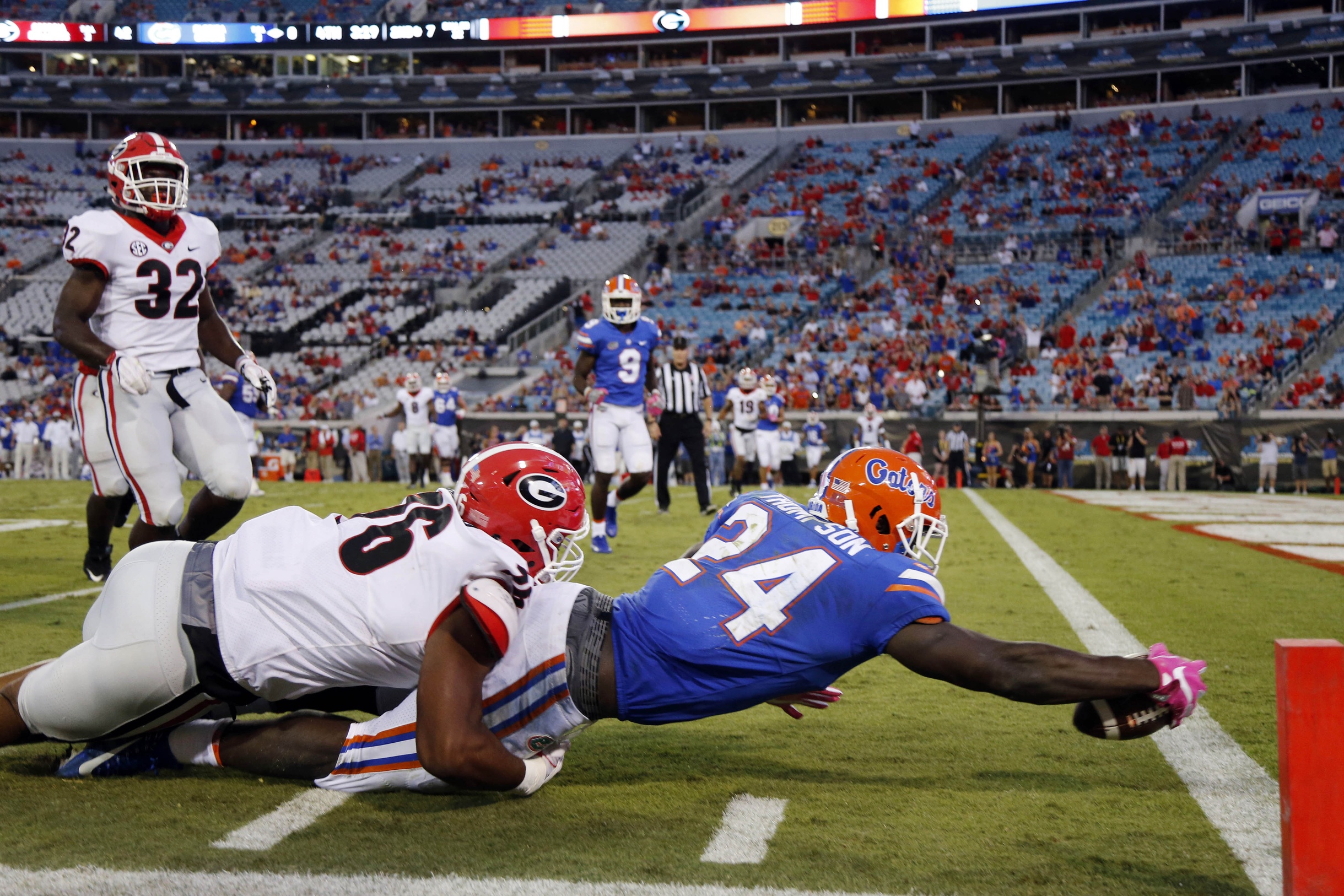 That was the most action the Gators had on Saturday. Contrary to Georgia’s freshman quarterback, Florida quarterback Feleipe Franks completed 7 of his 19 pass attempts. Franks only compiled a total of 30 passing yards.

It wasn’t until the fourth quarter when Florida even entertained the thought of benching Franks and bringing in back-up quarterback and graduate transfer, Malik Zaire. With Zaire under center, the Gators got down the field and finally crossed into the end zone.

Zaire completed three of his six pass attempts for 36 yards. After feeding running back Lamical Perine the majority of the day, the Gators turned to Mark Thompson. He finished with 13 carries and rushed for Florida’s only touchdown.

Florida’s performance against Georgia surely doesn’t look good for McElwain’s job security. Saturday could have been the final game for Gators coach Jim McElwain. It was Florida’s most lopsided loss in the series since a 44-0 shutout in 1982.

The Gators seem to be dealing with the kind of trouble that only a coaching change can correct. It’s no longer a matter of if, but when. The question becomes can Florida fire McElwain with cause and avoid a $12.9 million buyout or are they willing to part ways regardless?

McElwain created a frenzy Monday of last week, when he said Florida players and families received death threats amid the team’s struggles.

Just a little snippet of #Gators QB Feleipe Franks when asked about the status of head coach Jim McElwain. pic.twitter.com/eTeZ1vRdPF

Other than McElwain’s future with Florida, the only question towards in the end of the game was whether Georgia would end Florida’s NCAA scoring record. The Gators haven’t been shut out since a 16-0 loss to Auburn in 1988.

Florida scored with 2:42 remaining to continue the streak to 368 games.

A senior at the University of Florida reporting on Gator sports, local Gainesville and surrounding area sports, and telling the stories of local athletes. Born and raised in Gainesville, Florida with a passion for telling people's stories and having fun doing it.
@SportsDarwinism
Previous When It Comes to McElwain’s Fate, It’s A Matter of When, Not If He’s Gone
Next No. 4 Gator Volleyball Dismantles Mississippi State