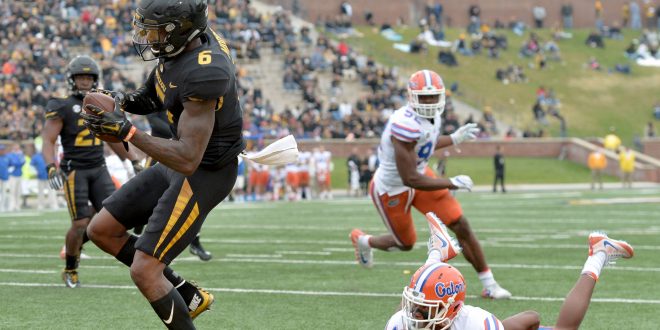 A hectic week for Florida that started with parting ways with their coach ended with a thud on the field.

A flat Gators team fell to the Missouri Tigers 45-16 in Columbia, getting dominated in all three phases of the game. Florida delivered a similarly lackluster performance as it did last week against Georgia, and lost in a similar fashion this week.

The loss drops Florida to 3-5 and means the Gators now have to win out in order to become bowl eligible. Those last three games are at South Carolina, then at home against UAB and Florida State. For Missouri, the win is their first conference victory after starting 0-4 in SEC play and moves them to 4-5.

Missouri came in having struggled in SEC games, but that didn’t matter on this afternoon, as their high-flying offense lived up to its billing.

The Tigers racked up 455 yards behind a balanced offensive attack. Drew Lock gained 228 yards through the air on 15-for-20 passing and tallied three scores. Five Missouri running backs combined for 227 yards on the ground, led by Larry Rountree who had 83 of those yards and three rushing touchdowns.

It’s the first time Florida has given up at least 42 points in consecutive games since 1917, according to ESPN Stats and Info.

Missouri started the game with a no-huddle offense, and used the high tempo to their benefit throughout the game.

Their first score, though, came after a Florida miscue.

A Brandon Powell muffed punt in the first quarter gave the Tigers the ball in the red zone, and Lock connected with Kendal Blanton for a 5-yard TD pass.

The Tigers then punched it into the end zone three more times in the second quarter as they entered halftime with a 28-6 lead. The scores came from two short Rountree runs, and a 15-yard connection from Lock to Ish Witter as he took advantage of an all-out blitz from the Gators.

Offensively, Florida couldn’t keep up. Malik Zaire, making his first start for Florida, ended the day 158 yards on 13-for-19 passing with a pick. Although he made a couple of nice plays throughout the day, the Gators offense struggled to find any rhythm.

And on the few drives in which the Gators could move the ball, they were unable to finish them off. On one specific drive, the Gators had first and goal from the 1-yard line, but were unable to punch the ball into the end zone. Their only first-half points came from two Eddy Pineiro field goals (38 yards and 36 yards).

In what was sort of the theme of the day, the Gators seemed to content to be getting any points on drives, which led to the ESPN commentator calling their attitude “lame.”

The second half didn’t go much better for Florida. Their only score came in garbage time, down 42-9. Feleipe Franks, who came in to replace Zaire with the game out of hand, hit Lamical Perine for a 16-yard TD pass. Franks ended up going 7-for-10 for 98 yards and the score in the short time he played.

Native New Englander. Follow me on Twitter: @jonacosta_10
@jonacosta_10
Previous High School Football: Gainesville defeats Eastside 35-14 to close out the regular season
Next Florida Strong From Beyond The Arc in 94-57 Victory Over UTampa