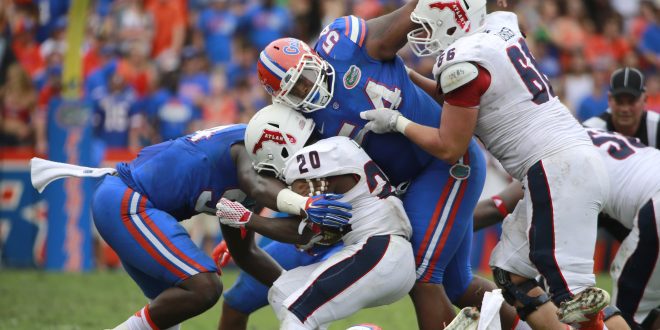 Khairi Clark Calls for Unity From the Gators

Heading into this weekend’s game against South Carolina, a main focus needs to be playing together as a team.

Focused on the Game

Many people are wondering what the team thinks of the current search for a new head coach. The Gator football team isn’t focusing on that. They are less focused on what happens with the coaching staff and more focused on how to better prepare for the games ahead.

Clark came into this football program right around the time when former head coach Will Muschamp lost his job at UF. Unlike some of his younger teammates, this whole experience is nothing new to him.

He also says that he’s helping the younger players come to terms with what’s happening. Clark is making sure those young guys don’t let this affect the way they play the game.

Clark and the Gators will continue to ignore and avoid the commentary on the new coaching position and hope to snap a four-game losing streak this weekend.

As they head to Columbia to face former head coach Will Muschamp and his Gamecocks, the Gators look to get past the multiple tough losses. Most importantly, Florida is looking to bounce back from the most recent loss to Missouri, 45-16.

Clark was recruited by Will Muschamp and he’s the reason Clark is playing for UF now. He says beating South Carolina would be huge for not only him, but for the team.

Going into this game, Clark has 10 total tackles for the season with a season-high three tackles against Tennessee.

This season has proved to be a big one for Clark because he really had to step up and become a leader on a very young defense. Florida lost a lot of depth due to suspensions and losing a couple key players from last year. Clark and Taven Bryan are two defenders that really came out strong for Florida.

Clark says the Gators need to learn to play as a unit if they want to finish the season stronger than they look right now. He also says that while the expectations at the beginning of the season may have been different, that doesn’t affect the way the team is playing now.