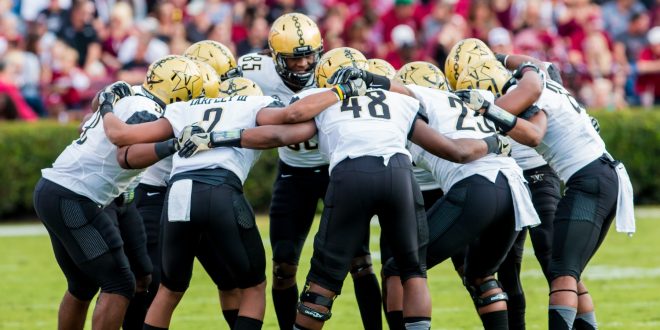 The Kentucky Wildcats travel to Nashville this weekend to face the Vanderbilt Commodores.

The Wildcats sit at 6-3 on the season 3-3 in conference play. Kentucky lost a heart-breaker last weekend to Ole Miss. The Rebels scored on a last second touchdown to clinch a 37-34 victory.

Kentucky head coach Mark Stoops and Vanderbilt head coach Derek Mason both stressed that focus this week would be crucial for pulling out a victory.

For Kentucky, it was a lack of focus that left the Wildcats on the wrong side of the scoreboard last weekend against the Rebels. Miscommunication on the defensive side of the ball led to big plays and touchdowns for the Rebels.

This lack of focus in the back end of the defense is a big area of concern for the Wildcats headed into this weekend’s game against Vanderbilt.

For the Commodores, Derek Mason says picking up their first win since Kansas State in week three has upped his teams spirits in preparation for this weekends game.  This win helped the Commodores get back into the winning mindset that Mason wants his team to be in.

"You know who you are. It is back and now what you gotta go do is let it rip." #RTI #reVealed pic.twitter.com/S4kiiCI7Hu

Watching the tape for the Kentucky side, Derek Mason says what stands out to him the most is the improved play of Kentucky’s offense this season. Offensively, Kentucky has been led by senior quarterback Stephen Johnson. Johnson has thrown for 1,605 yards on the season and 10 touchdowns.

In conjunction with improved quarterback play, Kentucky has boasted one of the best rushing attacks in the SEC. Sophomore running back Benny Snell Jr. has rushed for 897 yards a 12 touchdowns this season.

Mark Stoops says this is something you come to expect from the defensive-minded coach like Derek Mason.

Sophomore Running Back Benny Snell Jr. is Leading the SEC with 897 Rushing Yards in 9 Games. (99.7 Yards Per Game) #BBN pic.twitter.com/Bu58gYz0DM

You can find coverage of this weekend’s game on SEC Network. Kick-off is set for 4.