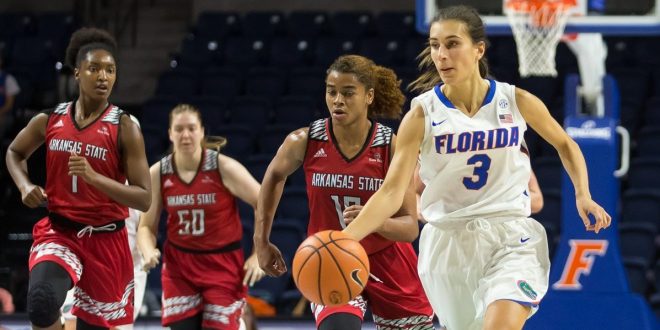 Coming into the second game of the 2016-17 season, the Gator women’s basketball team had several areas of concern. The Gators got off to a rough start against Georgia State in their season opening win; they struggled attacking the boards on offense, they would be passive in pulling down defensive rebounds as well.  These concerns showed themselves again Tuesday night. This time, these mistakes proved costly as the Gators were upset at home against Arkansas State, losing 70-69.

The Gators knew that the Arkansas State Red Wolves were a team that prides itself on disrupting passing lanes and causing turnovers. However, Gator haphazard passes allowed the Red Wolves to make their move. Arkansas State was able to get 24 points off 23 Gator turnovers. Gator coach Cam Newbauer knows these turnovers contributed greatly to the loss. Several of the Gator turnovers occurred at key spots that could’ve changed the outcome of the game. Junior guard Funda Nakkasoglu says that the team’s lack of aggressiveness and precision led to bad passes.

The lack of aggression from the Gators wasn’t just noticeable in the passes, it was also seen on the boards. The Gators stressed attacking the boards and boxing out against the Red Wolves. When the ball tipped off, the Red Wolves played physical and tenaciously. This caused the Gators to struggle. In Tuesday’s loss, the Gators allowed Arkansas State to pull down 20 offensive rebounds. The Gators only pulled down 13 on the offensive end. Even though they came out on the winning end in the rebounding department, this will remain an area of focus for this team.

With 3:08 left in the game, the Gators trailed by five. The Gators were able to get back into the game thanks to a Delicia Washington layup, Hayley Lorenzen going one of two from the line, and Funda Nakkasoglu draining a three. Nakkasoglu’s three brought the Gators within one with 20 seconds left. On the inbound, the Gators allowed the Red Wolves to bring the ball past half court to set up their offense. The team didn’t foul until there was six seconds on the clock. Fans in the crowd were scratching their heads to why the team didn’t foul as soon as the ball was inbounded. Coach Newbauer explains what happened during that stretch. Nakkasoglu says it was a miscommunication between the bench and the players.

The old adage goes “it’s not how you start, it’s how you finish.” For this Gator team, however, the cause for concern is how the team starts the game. For the second game in a row, the Gators failed to come out of the gates strong. This caused them to play from behind and try to dig themselves out of an early hole. The rough start caused Newbauer to look down the bench for a spark. Coach Newbauer wants his players to play hard and if they don’t, he’ll find someone else who will. The Gators were then forced into a back in forth battle with the Red Wolves where the lead changed hands 10 times. Newbauer says this team isn’t there yet to get involved in those types of games.

Even though the loss was a tough one, Newbauer believes that this loss was what this team needed to improve. The Gator women’s basketball team looks to bounce back at home Friday night. The Gators host in-state rival and 18th ranked Florida State.