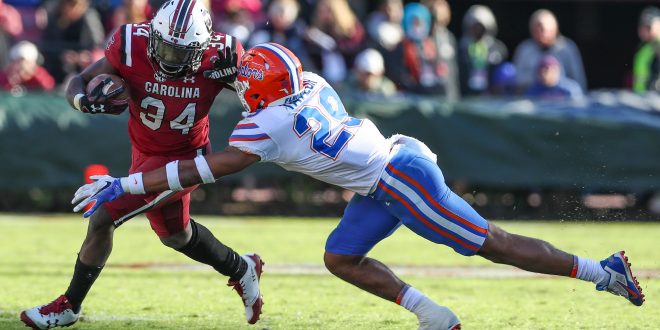 Gator Football Tries To Keep Fighting As Season Winds Down

Forget bowl eligibility. Forget a spot in the college football playoff or a spot in Atlanta for the SEC Championship Game.

For Florida interim head coach Randy Shannon and his Gators, its all about finishing the season out strong.

“Guys are not thinking about the bowl,” Shannon said. “We cannot go to the bowl. Only thing they’re thinking about is coming back to the Swamp. Two games where they can go and play for their fans and friends and family.”

That starts this week with a battle against 7-3 UAB before hosting FSU in a rivalry game of two struggling in-state traditional powerhouses. And while it may be hard for a team sitting at 3-6 to see out the season strong considering the downward trajectory of the season, Shannon still believes in his guys.

And that’s big for a Florida team that seemed to show some fight against South Carolina just one week after seeming lifeless in a blowout loss at Missouri. That’s something they’ll have to continue to show the next two weeks if they want to finish with more than three wins on the season.

“We need to play hard from the first quarter to the fourth quarter and anything more after that,” running back Mark Thompson said. “We just want to win. It’s not about need. It’s about want.”

Shannon mentioned guys like Thompson and David Reese, among others like Cece Jefferson, Taven Bryan, and Brandon Powell, as players that have stepped up in recent practices as epitomes of that.

“You’ve still got a lot of guys like that that are not tanking or going through the motions,” Shannon said.

The Gators will hope their players do more than just go through the motions the next two weeks as they look to finish on a high. A high way higher than the lows of the last five consecutive losses.