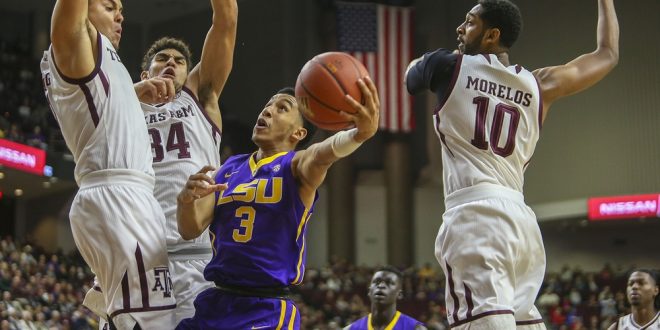 Arkansas To Host Waters and the LSU Tigers

The LSU Tigers (10-4, 1-1 SEC) will be looking to ride the momentum they gained from their previous game, while the Arkansas Razorbacks (11-4, 1-2 SEC) are hoping to forget about their recent trend of losses when the two teams face off tonight.

SEC Freshman of the Week Tremont Waters’ game-winning 3-point shot might be exactly what the Tigers needed to jump start their season as they continue with difficult conference play. Tigers head coach Will Wade, in particular, is hoping to use the buzzer-beater as a momentum-builder.

Waters has had a great impact on the team this season and has been the team leader in points for several games this season.

Wade knows it’s a luxury having Waters on the team and that he has the “it” factor that allows him to contribute so much to the team.

Despite having Waters and momentum on their side, the Tigers will still have a challenge in front of them when they take on Arkansas. Wade realizes this challenge and is hoping his team will be able to overcome any difficulties.

Unlike their opponent, the Razorbacks will be trying to forget their previous two performances — road losses to Mississippi State and Auburn. The team will instead look to move forward from its slide and turn things around against a solid Tiger team.

Arkansas will be leaning on senior guards Jaylen Barford and Daryl Macon. Barford and Macon lead the team in scoring and have been an essential part of the team this season, according to head coach Mike Anderson.

Another key piece of the team is senior forward Trey Thompson. Anderson is hoping to get more out of Thompson and wants to see him become more assertive. Anderson knows Thompson has the ability to do it, he just has to display it during games.

With the SEC being such a strong conference this season, this matchup is sure to be a tough one for each team, along with all the rest of their conference play. Tip-off for the game is at 8pm and will be broadcast on SEC Network.