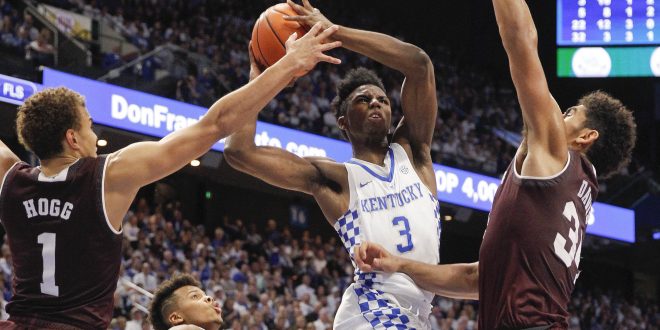 Tuesday night eight SEC teams met up to play some basketball. The three nationally ranked SEC teams all came out victorious, but none of the wins came easy for any team.

Alabama stayed ahead of the South Carolina Gamecocks throughout the game to take home the win, 76-62.

Alabama rolls past the Gamecocks for the W‼️

This win snaps a two-game losing streak for Alabama.

The Crimson Tide also had four players score in the double figures.

Alabama held South Carolina to just 7-of-25 shooting from the floor and to 0 of 6 from beyond the arc the second half of the game.  Winning this game improved Alabama’s record to 10-6 and 2-2 in the SEC.

Texas A&M kept up a good fight against nationally ranked Kentucky, but ultimately couldn’t grab the win. Number 21 Kentucky defeated the Aggies by just one point, 74-73.

With just a couple minutes left in the second half, Kentucky forward P.J. Washington made a steal which led to freshman Kevin Knox’s go-ahead lay up.  Between two free throws, Washington added a layup to give the Wildcats a 73-69 lead but the Aggies wouldn’t go away.  They took advantage of a couple Kentucky missed free throws to get within a point of the Wildcats and they had an open three point look to take the lead but the shot wouldn’t go down and Kentucky held on for the win.

Back to winning ways tonight. On to the next one. #EmbraceTheBattle pic.twitter.com/VJ4pBevJva

Tennessee roared back from a 10 point halftime deficit to beat in state rival Vanderbilt Tuesday night, 92-84.  Sophomore Grant Williams had a career high night with 37 points on 12-of 20 shooting for the Vols to go along with seven rebounds, three blocks and two assists.

Despite an early lead by Ole Miss, nationally ranked Auburn came back to defeat the Rebels 85-70.  This was an unusual game for the Tigers as they have been putting up big leads early on and then taking home the wins.

This win improved Auburn’s record to 15-1 overall and 3-0 in the SEC.  Ole Miss, on the other hand, is now 9-7 overall and 2-2 in the SEC. The Florida Gators will take on Ole Miss this Saturday in Oxford.

North Carolina Native with a passion for sports. Follow me on twitter @lcavasinni11
Previous Arkansas To Host Waters and the LSU Tigers
Next Q&A With Mississippi State Basketball Radio Analyst Richard Williams