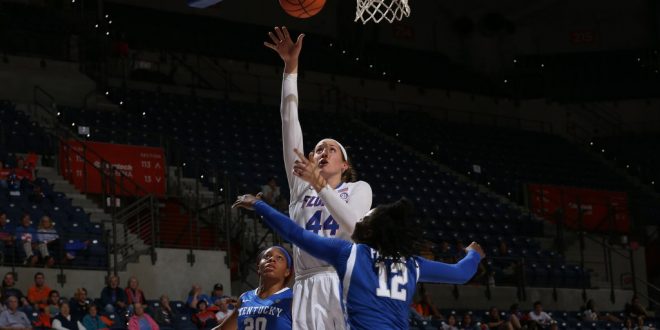 The Florida Gator women’s basketball team finally got the monkey of their back Thursday night in Arkansas. Florida started the game with an intensity that has been missing for some of the team’s more frustrating losses. This propelled the team to a winning performance that saw the team taking it inside, dominating on the glass and playing lock down defense when it mattered. The 65-51 win over Arkansas ended a five game losing skid. The Gators have a chance to get revenge on one of those losses when they welcome Ole Miss, who the Gators lost to in double overtime on January 7, Sunday afternoon.

First episode of Bench Points in the books! @Zach_Oliveri and I recap @GatorsWBK first SEC win against Arkansas, preview the rematch against Ole Miss, and look around the SEC. https://t.co/RoOPjSku2r @ESPNGainesville

In the win over Arkansas Thursday, the Gators played their first complete game in a long time. Florida led the entire game and prevented Arkansas from having any chance of getting back into the game. The lead for the Gators grew to as high as 18. Newbauer describes what went right for the Gators in the team’s first SEC win. One of the things that the Gators did exceptionally well offensively establishing a dominant presence inside. Florida’s senior forwards Haley Lorenzen and Paulina Hersler led the charge by taking advantage of mismatches inside. Their success inside led to the Razorbacks doubling the two. Lorenzen says that her taking on the double team allowed for her teammates to get open looks.

Sunday will mark two weeks since the Gators and Rebels took part in an epic double overtime game. The Rebels made the necessary plays at the end to secure the win. Since the last time these two teams met, the Rebels dropped their last two outings. Ole Miss lost Thursday night to No.11 Missouri 67-48. Even though the Rebels dropped four of their last five, Newbauer believes Ole Miss has improved since they last saw them. He says what the Rebels bring to the table on Sunday. A key to Florida hanging around with Ole Miss in their last meeting was their ability to slow down Ole Miss’ prolific scorer Madinah Muhammad. Muhammad had 5 points heading into the fourth quarter against the Gators two weeks ago. To prevent Muhammad from influencing the game, Newbauer says the Gators need to focus on her early.

Now that Florida secured their first conference win of the season, the Gators have one thing on their mind heading into their second meeting with Ole Miss, revenge. Florida had chances to put the game away at the line and on offense. However, the Gators couldn’t hit key free throws and committed costly turnovers down the stretch. The Gators were forced to play catch up in Oxford after a sluggish start. A major key that Florida needs to do differently against the Rebels is to start fast. Florida sophomore guard Delicia Washington says the team needs come out swinging to start the game. If the Gators play with the same intensity and focus that they played with against Arkansas, they could win their second straight SEC contest in a row. Lorenzen wants to see a similar fight that the team had in their first game with Ole Miss, but from the start.

The Gators look to avenge a double-overtime loss when they host Ole Miss Sunday. Florida and Ole Miss will tip things off from Exactech Arena at 1 p.m.