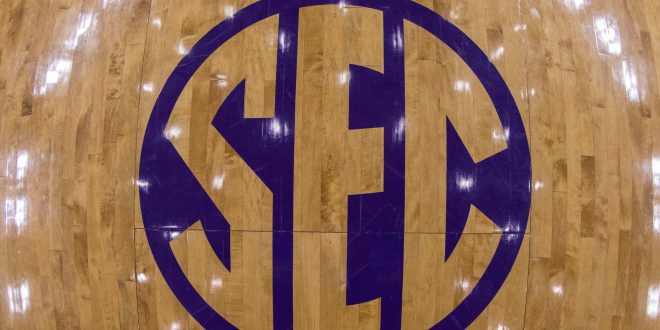 Saturday there will be seven match ups between SEC foes. And currently there are only three SEC teams ranked heading into this weekend; No. 17 Auburn, No. 18 Kentucky and No. 21 Tennessee.

Florida at No. 18 Kentucky

The Florida Gators are heading into this SEC rivalry game against the Kentucky wildcats with a 88-73 win over Arkansas. Florida’s, KeVaughn Allen, played a major factor in that game putting up 28 points. He also, went 8 for 12 field goals and 6 for 6 free throws. Gator Head Basketball Coach, Mike White, said he was excited for Allen.

The 18th ranked Kentucky Wildcats head into the game Saturday after coming off a loss to South Carolina 76-68. The Wildcats and have a 14-4 record and are 3rd in the SEC. Meanwhile, the Gators are 1st in the SEC with a 13-5 record. Florida averages 82 points per game compared to Kentucky’s 77.7. However, according to ESPN’s Matchup Predictor Kentucky is favored to win by 62.4%.

"We have some tough kids. We have a resilient group" – @MikeWhiteUF

The LSU Tigers have the better record at 11-6 opposed to Vanderbilt’s 6-12 record. However, Vandy is the home team, and ESPN’s match up predictor even predicts them to pull off a win. But the Commodores are coming off four straight SEC loss’s. While the Tigers are coming off two loss’s to Alabama and Georgia.

This season, the Tigers outscore the Commodores, putting up 79.8 points per game opposed to Vandy’s 71.

Missouri at Texas A &M

The Missouri Tigers are ranked 5th in the SEC, and are coming off a 59-55 win over Tennessee. However, Texas A & M is the home team and favored to win. Though, both teams seem to be evenly matched with the Tigers 13-5 record opposed to the Aggies 12-6 record.

The 17th ranked Auburn Tigers are highest ranked SEC team going into the weekend and are coming off a 76-71 loss to Alabama.

Through the adversity, we fight. #WarEagle pic.twitter.com/wS53bhvJIn

The Georgia Bulldogs, however, are coming off a close 61-60 win over LSU.

No. 21 Tennessee at South Carolina

The number 21 Tennessee Volunteers are traveling to South Carolina to face the Gamecocks. The Vols are coming off a 59-55 loss to Missouri. And the Gamecocks just got impressive win over the Kentucky Wildcats 76-68.

Alabama is on a three game winning streak. With their last win over 17th ranked Auburn 76-71. And Mississippi St. is coming off a 59-55 win over Tennessee.

Follow me on Twitter @SarahCarlieUF or Instagram @sarahcarlie
@SarahCarlieUF
Previous Florida Prepares For No. 18 Kentucky in Lexington on Saturday
Next Gator Women’s Basketball Hopes to Build on First Conference Win in Rematch with Ole Miss