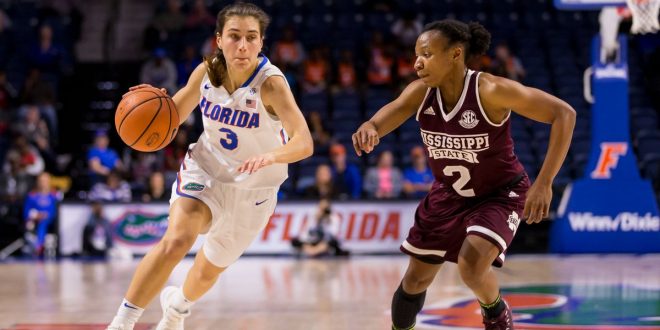 Gator Women’s Basketball Suffer Worst Loss of the Season to No. 2 Mississippi State 98-50

History repeated itself in Florida women’s basketball’s second meeting in two weeks with Mississippi State. Despite being competitive in the first half, the Florida Gators were steamrolled by second ranked Mississippi State in the second half. This led to the most lopsided defeat the Gators suffered all season, 98-50. Like the team has done all season, the Gators focused on the big picture and are already looking ahead to the next one.

Similar to what they did in their last meeting with the Bulldogs, the Gators were able to hang around in the first half. Mississippi State tried to put the Gators away early with three 3 pointers right out of the gate. Florida weathered the initial storm and stayed in the game. This was possible thanks to Florida’s early success with the 3 ball. The Gators converted on three of their first five long range attempts but still trailed by 12 at the end of the first quarter.

In the second quarter, the Gators made their move. The opportunity arose when Mississippi State forward Teaira McCowan was on the bench for some rest. McCowan’s absence opened up the paint for the Gators and they took advantage. An and-one layup from Florida senior forward Haley Lorenzen brought Florida within three. The Bulldogs would continue their struggles from the field, dealing with a four minute scoring drought. Florida experienced some troubles as well. The drought for Mississippi State would end with a layup from guard Victoria Vivians. This would spark a 13-3 run to end the half for the Bulldogs. It was the closest Florida came to catching the Bulldogs.

Overall for the night, Mississippi State finished with a shooting percentage of 55.6%. This came off of 72 shot attempts. They totaled an astonishing 52 points in the paint and limited Florida to just 18.

Even though Mississippi State came into their second meeting with the Gators as heavy favorites, Bulldogs head coach Vic Schaefer said he was concerned about the matchup.

Mississippi State’s defensive pressure forced the Gators to speed up their offensive pace, which has proven to be dangerous for Florida. When Florida starts to rush offensive possessions, the turnovers just start to pile on. That was the case once again Thursday night.

Florida junior guard Funda Nakkasoglu said that the pressure got into their heads and cause even more mistakes.

Just moments after their beat down loss to Mississippi State, the Gators already shifted their attention to Sunday’s meeting with the defending national champion South Carolina Gamecocks. Three of Florida’s next four remaining contests are against nationally ranked opponents. Other teams would get frustrated and start thinking of the off-season. This Florida team is not like most teams. They have welcomed any adversity or challenges that this season has brought them. Florida head coach Cam Newbauer has instilled this mentality in his team this season. That showed at the end of the post game press conference. One of Florida’s senior leaders Haley Lorenzen addressed the ongoing question if this stretch has affected the team.

Lorenzen said that the team knows that this stretch will benefit the program for the future.

The Gators are approaching the tail end of the six ranked opponents in six games gauntlet Sunday afternoon. They’ll travel to Columbia, South Carolina to face the defending national champion Gamecocks. Tip-off from Columbia is set for 1 p.m. Sunday.