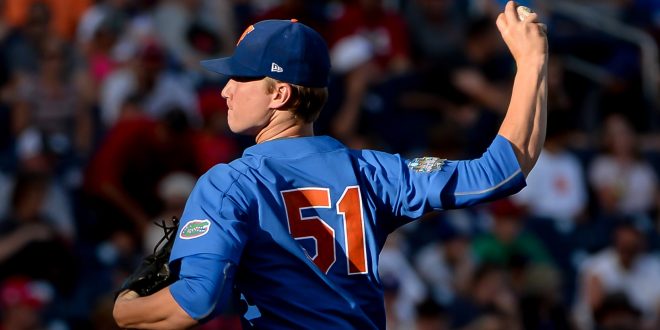 It’s been 234 days since the Florida Gators piled on top of one another in Omaha to celebrate the school’s first national championship. Throughout the offseason, head coach Kevin O’Sullivan has been telling this year’s Gator baseball team to write their own story.

Friday night against Siena, Brady Singer and the Gators will begin to pen chapter one.

O’Sullivan’s team enters the 2018 season as the No. 1 team in the country in every poll. The high expectations are thanks in part to a strong, proven starting rotation. However, it’s important to note that most of the staff will have a more stringent pitch count early in the season.

Preseason All-American Brady Singer knows that will be the case and said he’s had a great spring.

Baseball America ranks Singer as the No. 1 draft prospect in the country. Not far behind at No. 8 is Florida’s Saturday starter Jackson Kowar. A big key for Kowar this Saturday and throughout the 2018 campaign will be working on limiting the free passes. In 2017, he issued a team-high 44 walks.

Closer Michael Byrne, also a preseason All-American, returns to anchor the Gator bullpen. O’Sullivan knows what he’s getting with Byrne. It’s the freshmen additions to the pen, according to O’Sullivan, that are going to need to step up.

The Siena Saints finished 10th in the Metro Atlantic Athletic Conference in 2017. This year, according to head coach Tony Rossie, the team has above-average hitting and average pitching. Rossi said Gator fans should expect to see a lot of different arms on the mound. Additionally, he’s focused on making sure his players improving both individually and collectively to be ready for conference play.

Junior Deacon Liput is suspended to begin the season for off-the-field issues. O’Sullivan will be turning to fellow junior Blake Reese to, at least temporarily, take his place at second base. Reese can and has played almost every position for the Gators.

With the departure of Mike Rivera, team captain JJ Schwarz will be asked to take on a heavier role behind the plate. O’Sullivan touched on how he’ll be constantly communicating with Schwarz to see how his legs are adjusting to the increased workload.

I'm an above-average golfer with surprisingly great touch around the greens. Click on my twitter link for some sports talk.
@Ry_McGinn
Previous Another Strong Performance Not Enough For Gator Women’s Basketball As They Drop Sixth Straight
Next Martin Truex Jr Looking to Continue Excellence at the 60th Daytona 500