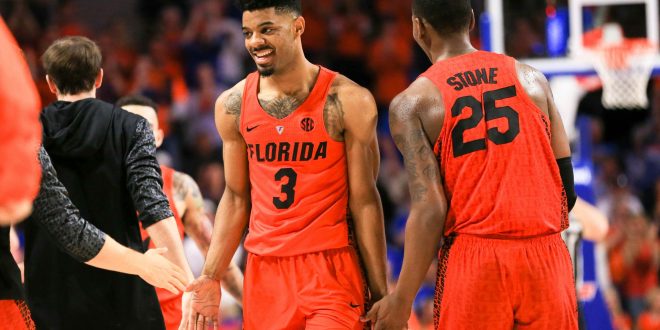 Jalen Hudson is Perfect Fit With the Gators

Jalen Hudson’s success in the NCAA tournament will be a key factor in his decision to either leave for the upcoming NBA draft or return to Florida for his senior season. After transferring from Virginia Tech and sitting out a year due to NCAA transfer rules, Hudson has been quite the surprise for the Florida Gators. He is averaging a team-leading 15.3 points and 3.9 rebounds per game, while shooting 45.4% from the field and a sensational 40.4% from beyond the arc. Despite becoming a local favorite in Gainesville, Hudson’s success with the Gators is far from a microcosm of his career.

JALEN HUDSON WITH THE PUTBACK

Hudson had some bright moments in Blacksburg, including a 32-point outburst in a win against Wake Forest, and a 23-point performance against No. 4 Duke. His scoring ability was evident, but his inability to play stringent defense on a night-to-night basis didn’t sit well with Williams, who is known in coaching circles around the country for his defense. Hudson only averaged 16.7 minutes per game during his freshman year. During the 2014-2015 season, Hudson played 9 minutes or less in eight different games. He also shot a subpar 28.3% from beyond the arc and 64.4% from the free-throw line. Even though he showed massive potential, his inefficiency and lack of effort on defense were the main storylines of his freshman campaign.

Hudson thought his second year would bring greener pastures, but he was mistaken. A larger role was supposed to help him make a sizable leap, but the expanded role never came. His minutes only grew from 16.7 MPG as a freshman to 20 MPG as a sophomore. His scoring average grew from 6.9 PPG to 8.4 PPG. Hudson’s game-by-game efficiency progressed, but his lack of fit within Buzz Williams’ gameplan forced him to seek a transfer.

After a failed player-coach relationship at Virginia Tech, one of the biggest factors for Hudson was who his next head coach was going to be. Hudson was recruited to Florida by assistant coach Jordan Mincy. He also had a previous relationship with former Florida Gator and fellow Virginian Devin Robinson. Both players grew up competing against one another on the AAU circuit in the Washington D.C.-Maryland-Virginia area. When Hudson reached out to Robinson about playing for the Gators, he had one major topic in mind: head coach Mike White.

After forming a strong connection with White, Hudson officially committed to the University of Florida.

Last season, the Gators went 27-9 and lost in the Elite Eight of the NCAA Tournament. Hudson watched his teammates’ success from the sidelines, patiently awaiting the end of his gap year. The constant waiting took a major toll on him.  Hudson craved to be out there contributing and experiencing those moments with his teammates.

“In a way, it’s like you’re going through the season alone, in your own little world. People didn’t even know I was part of the team,” Hudson said in an interview with FloridaGators.com.

Hudson has thrived in the Gators’ pace-and-space system. Having a legitimate pass-first point guard in Chris Chiozza as well as elite scorers like Egor Koulechov and KeVaughn Allen opens up ample opportunities for Hudson to display his scoring prowess. The Richmond, Virginia product has not been afraid to let the ball fly, averaging 5.7 three-point attempts per game. Hudson’s ability to sustain a three-point clip over 40% this season added another asset to his bag of offensive tricks. He was also named SEC Player of the Week three different times during the 2017-2018 season.

Even with his top-notch scoring ability, Hudson still has room to improve on the defensive end. He has played less than 23 minutes in 10 different games this season because of his defensive deficiencies. Throughout the season, White has continuously lamented about the fact that Hudson’s defensive lapses are simply because of a lack of effort.

“My game has changed a lot on both ends of the floor,” Hudson said before Florida’s Round of 64 matchup with St. Bonaventure. “[I’m] still trying to continue to get better every day. Not exactly where I wanted to be. I feel like my ceiling is still pretty high, but it’s about us right now, know what I mean. March Madness is always about everybody. It’s not about individual things. It’s going to take everybody tomorrow [vs. St. Bonaventure]. So that’s what I’ve been focusing on, giving as much as I can, being a servant.”

Hudson has posted double-digit scoring in 27 of the Gators 33 games this season. He recorded a career-high 35 points against 17th ranked Gonzaga in the PK80. Hudson has proved that he has NBA talent and can compete with top-notch competition. His potential is dependent on whether he can make a legitimate impact on the defensive side of the ball. NBA Draft Net’s latest mock draft projects Hudson to go in the 2nd round of the 2018 NBA Draft to the Chicago Bulls with the 52nd pick.

The #Gators are 14-4 this season when Jalen Hudson scores 16 or more points.

Previous No. 2 Florida Loses to No. 10 Georgia in Series Opener
Next Gamecocks Overpower Gators