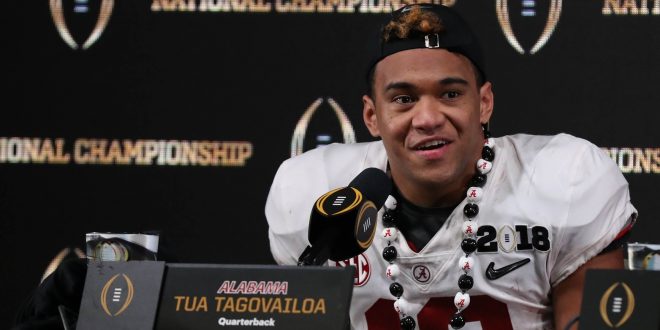 Alabama Quarterbacks Dueling in Competition to be Starter

There is no rest for the weary in the Alabama Crimson Tide football program. In this particular instance, there is no rest for quarterbacks Jalen Hurts and Tua Tagovailoa. Fresh off a national championship win over the Georgia Bulldogs, the competition is on for the starting quarterback position at Alabama.

Alabama QB Tua Tagovailoa hurt his thumb in practice and will be taken to Birmingham to be evaluated. "Probably going to require some time for him to get back. I'm not going to speculate on what the injury might be," Nick Saban said. https://t.co/kmKJn5nr4b

Alabama head coach Nick Saban would meet with press after spring practice to answer questions about the competition.

One of the biggest questions heading in to the meeting was the question of “who’s starting.” In classic Saban form, he would retort, talking about how both players are starting-material.

“Both those guys have been great,” Saban said. “It’s two good players, and they can both contribute to our team.”

With the season still months away, it’s all about giving both players a shot to earn their spot as the QB1 for Alabama.

“We’re gonna give both of them an opportunity to do that,” Saban said.

Saban will keep a close eye on the battle of Hurts vs. Tagavailoa, with neither of the Alabama quarterbacks having a glaring and decisive advantage in the duel.

This debate would start at the national championship game. When Hurts put up three of eight for 21 yards in the first half, the Tide made a switch. Tagovailoa would complete 14 of 24 passes for 166 yards and three touchdowns against the Bulldogs.

One big storyline that is developing from the competition is a spring training injury. Tagovailoa hurt his thumb, but the extent of this injury is unknown right now, according to Saban and Alex Scarborough of ESPN.

Alabama QB Tua Tagovailoa hurt his thumb in practice and will be taken to Birmingham to be evaluated. "Probably going to require some time for him to get back. I'm not going to speculate on what the injury might be," Nick Saban said. https://t.co/kmKJn5nr4b

While this may hamper Tagavailoa in the short term, the battle is still on in the long term. The “hero of the national championship game” may be out right now, but you can assure that Saban is keeping a close eye. Does the staple of the Tide step up in Hurts, or will the new generation take the throne in Tagavailoa? With the season inching closer, these questions will be answered sooner, rather than later.