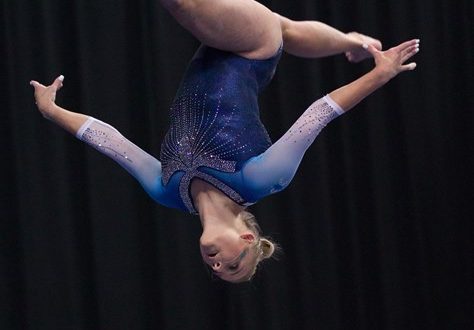 The University of Florida gymnastics team is headed for the NCAA Regional Gymnastics Championships. The Gators will compete in University Park, Pennsylvania, on April 7. 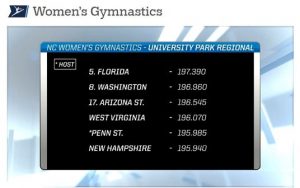 The top two teams and the top two all-around competitors (who are not on an advancing team) from each region site advances to the NCAA Championships. The championships are set for April 20-21 at the Chaifetz Arena in St. Louis, Missouri.

All eight Southeeastern Conference gymnastics programs are set to compete in the regionals, according to the SEC. The regional selections are as follows:

A Gator claimed at least a share of each apparatus title.

Freshman Alyssa Baumann was named the SEC Champion on balance beam after scoring 9.975.

Alicia Boren shared the evening’s floor exercise win at 9.90. She was second in the all-around, falling short 0.025 to LSU’s Sarah Finnegan. Finnegan scored 39.50 for the title.

Florida will compete in the NCAA regionals on April 7.

Kate Venezio is a fourth-year telecommunication-news student at the University of Florida. Kate does it all: Behind the camera she captures emotional moments as a photographer for the University of Florida Athletic Association. She's comfortable being in front of the camera, too. Kate interviews players, coaches, fans and family members for pre- and post-game coverage as a beat reporter for ESPN Gainesville/WRUF-FM. In addition, Kate produces the sports segment for the weekly WUFT News program. There, she's responsible for writing the script in its entirety to include production commands. The presentation includes video highlights and interviews taped and edited, and Kate then live anchors the final package on a daily deadline. In addition, she writes stories for wruf.com where she informs sports fans of local, state, and national trending topics. Kate also utilizes social media as a tool to help get the stories in front of viewers.
@@kate_venezio
Previous Can Florida get their Quarterback ?
Next No. 4 Gator Softball Hosts FIU in Mid-Week Doubleheader