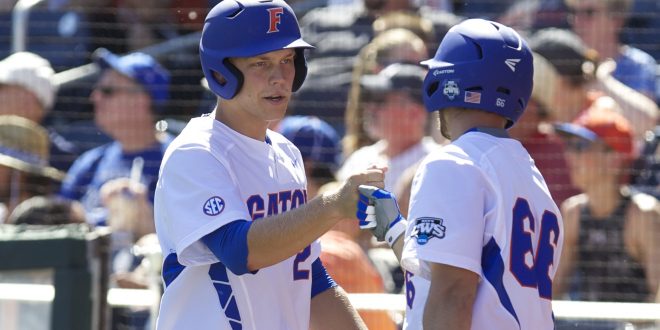 The #2 Florida baseball team took the series against the #8 Vanderbilt Commodores with a 10-2 win Saturday afternoon in Gainesville. Florida rapped out 12 hits and used a seven run seventh inning to put away the Commodores.  With the series win the Gators are now 24-5 and 6-2 in conference, while Vandy now is 17-10 with a 5-3 in conference record.

Jackson Kowar got the start on the mound for Florida and did well, pitching six and a third innings, coming away with six strikeouts while allowing five hits, three walks and one run.  Kowar was replaced by freshman lefty Jordan Butler, who he felt did a nice job on the mound.

The Gators scored two runs in the first inning as Nelson Maldonado doubled with one out and Jonathan India was hit by a pitch.  After Wil Dalton struck out, JJ Schwarz singled to drive in two runs to give the Gators a 2-0 lead.  Maldonado’s sacrifice fly in the second made it 3-0 Gators.

By no surprise Jonathan India had not only a another good game but another hit. In the fifth, he singled to left field to extend his hitting streak to 14 games.

A live look at @GatorsBB Jonathan India. A single for him extends his hitting streak to 14 games pic.twitter.com/xImztPVS1S

JJ Schwarz would drive in another run in the seventh inning and that RBI brought his total RBI count to 214 in his career. He is now tied with Brad Wilkerson for second-most at Florida. Preston Tucker, now playing for the Atlanta Braves currently holds the record with 258 career RBI’s.

In the first game of the series Gator closer Michael Byrne, set the school career high saves record with 26. Florida’s head coach, Kevin O’sullivan, said that he is thrilled those two players have accomplished what they have in their time as Gators.

Vanderbilt scored a run in the top of the seventh to make it a 3-1 game but like on Friday, the Gator offense exploded in the seventh inning.  With two outs and one on, Wil Dalton singled in Deacon Liput to make it a 4-1 game.  Schwarz hit his RBI double to plate Dalton and Austin Langworthy followed with an infield pop up that Vanderbilt could not handle and it fell for a hit.  Blake Reese walked and Keenan Bell followed with a three run homer to break the game open.  Nick Horvath doubled and Deacon Liput drove him in with a hit to end Florida’s seven run seventh inning.

The Gators have just scored 7 runs in the 7th…..

After the big seventh inning, several pitching changes by both teams netted Vanderbilt one more run on a solo homer by Ty Duvall in the ninth inning to make it a 10-2 final.

The Gators will be going for the sweep over the Commodores on Easter Sunday at noon on the SEC Network.