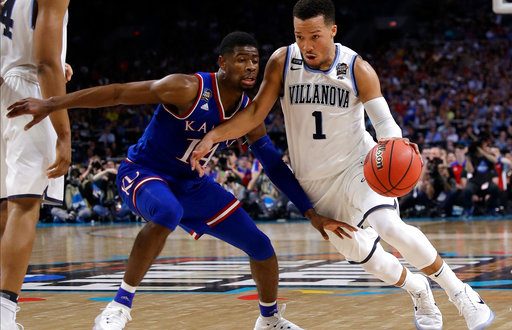 Whether they’ll be able to repeat that production will be tested tonight as they face No. 3 seed Michigan in the title game. The top-seeded Wildcats knocked in a tournament-record 18 3-pointers in a 95-79 victory over No. 1 seed Kansas on Saturday and trailed for only a few minutes during the game.

Michigan will look to keep the rain from coming down too hard.

With all of the 3-pt. shots Villanova was making, some viewers took to Twitter to make a particular comparison about what was happening. In the first half alone, the Wildcats made 13 3-pointers and poured it on against the Jayhawks, leading by as much as 22-4 early in the game.

Thus, the Golden State Warriors comparisons came out of the cracks.

Why are the Golden State Warriors wearing Villanova's uniforms?#KUBBALL

John Beilein on Villanova's offense: "This is the Golden State Warriors:

Seven players made 3-pointers for Villanova, including three in the first half from junior guard and AP Player of the Year Jalen Brunson, who also assisted on three other 3-pt. shots. Redshirt sophomore guard Donte Divincenzo made three 3-pt. shots in the opening half and went 4-for-4 from the free throw line, finishing with 15 points on the night.

Forward Eric Paschall converted on nearly all of his shots beyond the arc, pouring in four 3-pointers on five attempts. He finished the game with a team- and game-high 24 points.

Overall, Villanova shot 55.4 percent from the field and 45 percent from 3-pt. range, which helped send them to the championship game.

Head coach Jay Wright called it just one of those nights.

Going into tonight’s game, the Wildcats are a 6.5-point favorite over the Wolverines. That’s the largest favorite since Duke over Butler in the 2010 championship game. Despite the big lead, both sides are coming in hot, particularly Michigan, which has won 14-straight games dating back to an 83-72 win over Wisconsin on Feb. 11.

There’s one particular reason why they open as the favorite. If Villanova can put up another shooting night like it did Saturday, Michigan will likely have its work cut out defending the perimeter. They were able to limit the chances against an efficient team in Loyola Chicago, though.

Brunson talked about the key to Villanova’s win and success.

The battle between the Wildcats and Wolverines will tip off at 9:20 p.m. ET at the Alamodome in San Antonio. Viewers can catch the game and pregame coverage on TBS and listen in on Westwood One Radio starting with Championship Monday at 6:30 p.m. ET.