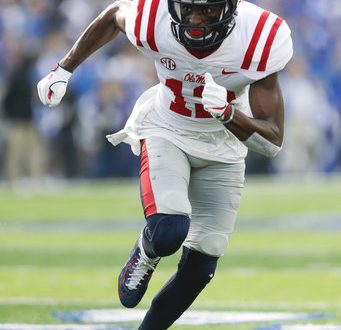 Following Ole Miss’s plethora of NCAA infractions and sanctions last season, many players were looking for a transfer. One of these players was redshirt junior Van Jefferson. Jefferson had a decent Freshman season, catching 49 passes for 543 yards and 3 touchdowns. However, as a sophomore, Jefferson saw a dip in production with 42 receptions for 456 yards and only 1 touchdown. Thus, Jefferson looked to Florida’s struggling offense and felt like he could add some much needed experience and receive more opportunities.

Junior receiver Tyrie Cleveland emerged last year as quarterback Feleipe Franks’ favorite target. However, due to Florida’s anemic offense last year, Cleveland only had 22 catches for 410 yards and 2 touchdowns. Furthermore, Sophomore Kadarius Toney also emerged as a dynamic talent last year for the Gators. Toney’s incredible ability to make people miss in the open field should warrant much more opportunity this year under head coach Dan Mullen. Jefferson realizes the wide receiver talent surrounding him, and hopes he’ll be able to prove he deserves a starting role on the team.

With Dan Mullen now at the helm, Van Jefferson isn’t the only player trying to learn a new offense. Jefferson is in the same boat with his fellow receivers, as they’re all competing and learning the new offense together. However, there is a lot Jefferson can learn from receivers such as Tyrie Cleveland and Kedarius Toney, who both have experience being a Florida Gator.

Van Jefferson is currently petitioning the NCAA to waive the rule that makes him ineligible to play this season. The rule requires that players must sit out a season after transferring within the FBS level. Despite this setback, Jefferson has still managed to impress the coaches this spring with his superior route running and valuable experience. Furthermore, Jefferson’s work ethic and attitude has really impressed Dan Mullen. Mullen is hopeful Jefferson will be rewarded for his efforts with the NCAA granting Jefferson eligibility to play this season.