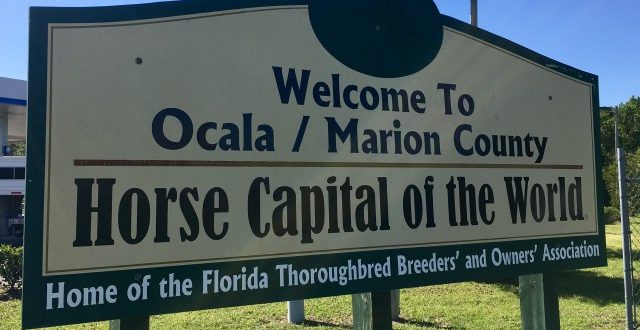 Ocala: The Horse Capital of the World

Driving on I-75, some might never know what lies beyond the Ocala rest stops and gas stations. However, if you take notice, there are several indications as to what the city is known for.

Rolling hills are grazed by several types of farm animals including beautiful horses. Farms and billboards with horses plastered on them line the side of the highway.

Known by many as the Horse Capital of the World, Ocala has a rich history and several connections to some of the most famous horse races in this country. What’s even more impressive is that many of the horses that have won those races started in North Central Florida.

Can’t believe it? In 2017, 17 of the 20 horses that competed in the Kentucky Derby, started their training in Ocala.

On April 17th, Director of Equine Engagement for Ocala/Marion County Chamber of Commerce Louisa Barton gave a presentation on “Ocala’s Connection to the Triple Crown.”

Anyone who attended this presentation learned about the rich history of horse breeding and training in Ocala and how it earned its nickname, the Horse Capital of the World.

Florida’s, but more specifically Ocala’s, claim to fame was in 1956 when a thoroughbred named Needles became the first Florida-bred horses to win the Kentucky Derby, also winning the Belmont Stakes the same year. According to an article written by David Schmitz in 2000, Needles earned his name after being injected with many at an early age due to a bout with pneumonia.

After winning the Derby and the Belmont in 1956, Needles went on to compete again in 1957 but suffered an injury which ended his racing that season. Once his career ended, he was back in Florida and studded at Bonnie Health Farm in Ocala.

Needles will be remembered for a lot of things. His name, that he was the first Florida-bred horse to win the Derby and Belmont, but there is something else that many might not know.

In an article written Bonnie Health Farm, “Needles brought world focus to breeding in Florida and Marion County where there are now about 400 Thoroughbred farms.”

Where It All Begins: The Races

The hectic five weeks of intense competition begins tomorrow when 20 horses Run for the Roses in Kentucky. But a fun fact to take note of, all of the horses that will compete in these races are three years old.

Just one day away, the track at Churchill Downs in Louisville, Kentucky is the first obstacle, and race, that a horse must win to begin their road to winning the Triple Crown. This prestigious event brings in horses from all over as well as fans of all ages.

But what makes this race challenging? According to Barton, this is the biggest field the horses have ever seen. Also, the racing conditions are almost like bumper cars.

This Saturday marks the 144th annual Run for the Roses, which will begin at 2:30 p.m. with coverage on NBC Sports.

Two weeks after competing in the Derby, the horses head up to Maryland for the Preakness Stakes. According to Barton, up to 14 horses with two also-eligible can enter. Also, the distance between the Derby and Preakness is the shortest of the racing marathon because the typical span is 3-4 weeks.

An advantage of this race is that it is a shorter distance. According to Barton, this is good for sprinters, but most distance horses are not good at sprinting. One of the biggest disadvantages of this race though is that it usually rains, which can cause mud on the track. As pointed out by Barton, some horses do not like mud and rain.

Next up? New York. Three weeks following the Preakness in Maryland, the horses head to Belmont Park to run the longest race they will ever enter in the United States. The Belmont allows up to 16 horses to enter and this is when the true test of speed and stamina collide.

The coveted and possibly hardest feat for a horse to win is the Triple Crown. This means a victory in the Kentucky Derby, the Preakness Stakes, and the Belmont Stakes. Some might ask, why is this so hard to do? As mentioned above in the race breakdown, within five weeks, the horses who are competing for this title will race in three different races, all of which vary in distance. Another challenging aspect? They are in three different states and in different weather conditions.

In horse-racing history, only twelve have accomplished the impressive and challenging task, and what some might not know is the last two horses to win the Triple Crown are connected to Ocala.

Affirmed, who won the Triple Crown in 1978, was bred in Ocala and went on to train there. The most recent champion, who is known around the world for ending the 37-year drought, trained right down the road at the McKathan Brother’s Training Center. His name is American Pharoah.

Described by his former trainer, J.B. McKathan, as an incredible and possibly a once in a lifetime horse, American Pharoah snapped the 37-year Triple Crown drought in 2015.

If winning the Triple Crown wasn’t impressive enough, he went on to win the Breeder’s Cup Classic in the same season. This means he went up against veteran horses as opposed to ones his own age that he competed against earlier in the 2015 racing season.

American Pharoah became the first horse to ever win what is called the Grand Slam of Thoroughbred racing.

Who’s In This Year

The number may be down from last year’s, but there is still an impressive number of horses (8/20) competing in the Derby this year with Ocala connections. These horses are Audible, Vino Rosso, Bravazo, Good Magic, Solomini, Flameaway, Firenze Fire and Free Drop Billy.

The road to the coveted Triple Crown begins tomorrow at 2:30 p.m. EST.