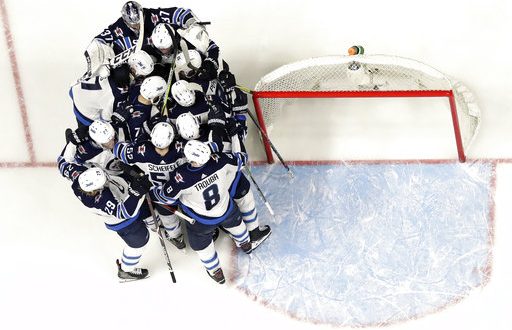 Winnipeg Jets celebrate after defeating the Nashville Predators 5-1 in Game 7 of an NHL hockey second-round playoff series Thursday, May 10, 2018, in Nashville, Tenn. The Jets advanced to the conference finals. (AP Photo/Mark Humphrey)

The Winnipeg Jets got off to a quick start in Game 1 of the Western Conference Finals. The Vegas Golden Knights were down 1-0 in the series before they knew it. While the Jets will be hoping to continue their winning ways, Vegas has intentions of evening the series before traveling to Vegas.

Looking to make it even stevens pic.twitter.com/qoThPAnK5c

Focusing on the Start

The Jets’ early 3-0 lead in the first period launched them toward their 4-2 victory on Saturday. After Winnipeg defenseman Dustin Byfuglien scored about one minute into the game, the Jets fell into a rhythm. Patrik Laine and Joel Armia had goals 46 seconds apart to give Winnipeg a three-goal lead, and the Golden Knights were unable to recover.

This quick start is one the Jets are hoping to repeat in Game 2. They will be concentrating on establishing themselves early and trying to keep the pressure on Vegas.

Jets center Bryan Little says focusing on jumping out to an early lead will go a long way in Monday’s matchup and hopefully give his team a bigger series lead.

Vegas knows they need to prevent this quick start and not force themselves to play from behind throughout the entire game.

“They scored on the first shift and played real well,” said Vegas coach Gerard Gallant. “We were chasing the game all night. They outworked us.”

The winner of game two won’t necessarily win the series, but a victory could go a long way in the outcome.

While the Jets will be focusing on establishing their game early, the Golden Knights will be trying to play a good, hard game.

Vegas center Jonathan Marchessault hopes to do just that. He credits Winnipeg for their success, particularly during the regular season, to earn home-ice advantage.

Marchessault added that going down 2-0 in the series would put them in a hole that would be difficult for them to fight out of. He says it’s extremely important for Vegas to bounce back from the loss and respond with a win.

This will be arguably the biggest challenge this season for the upstart Golden Knights. Ultimately, this game could set the tone for the remainder of the series against Winnipeg. The second game in the Western Conference Final will begin at 8 p.m. Finally, stick with ESPN 98.1 FM – 850 AM WRUF for live coverage beginning at 7:45 p.m.