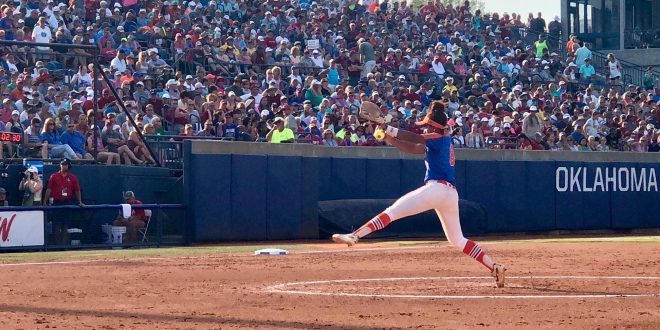 Aleshia Ocasio throws a pitch in the 2-0 loss versus Oklahoma. Photo: Kate Venezio/WRUF

The second-seeded Florida Gators fell 2-0 to the fourth-seeded Oklahoma Sooners in the Women’s College World Series (WCWS) on Saturday night. The Gators could not find a rhythm on offense against Sooners pitcher Paige Parker (31-3), allowing two hits in seven innings. Parker had already pitched a shutout win against Arizona State earlier in the day.

The bases were loaded for Oklahoma following two walks (Alo intentionally walked for the second time today) and a single in the bottom of the fifth. The Sooners extended the lead when Ocasio’s wild pitch allowed Shay Knighten to reach first, despite striking out. Caleigh Clifton scored from third. It took Ocasio four strikeouts to get out of the inning.

Wheaton’s single in the seventh was the Gators only hit after the Sooners took a 2-0 lead. Furthermore, Florida scored only once in the last 11 innings of WCWS play.

In the postgame press conference, the four seniors and Amanda Lorenz joined Florida head coach Tim Walton. Although the players looked emotional, they answered questions from the media. Nicole DeWitt said Paige Parker’s change up is “pretty dirty.” On the other hand, junior Amanda Lorenz cried as she depicted how grateful she is to be teammates with Ocasio, Wheaton, DeWitt and Kayli Kvistad.

Additionally, Lorenz said that she’d never play with an athlete like Ocasio again.

The last question for Florida was a big one about Walton’s future. He dubbed down rumors about him being interested in the Texas head coaching job.

“I don’t think this is the place to have that conversation. Thanks, it’s flattering. I have a great job.” – Tim Walton

The final out from OKC! @OU_Softball secures its second win of the day with a 2-0 victory over Florida! #WCWS pic.twitter.com/IduICTXttv

Florida (56-11) is now eliminated from the WCWS along with Arizona State, Georgia and either Oregon or Florida State. Oklahoma (57-3) will play Washington on Sunday.