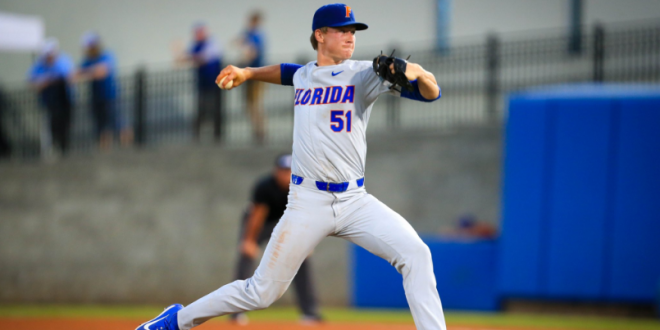 Three home runs were the source of all the Gator runs in Saturday’s 3-2 win over the Jacksonville Dolphins in an NCAA Regional hosted by the Gators.  Florida is now in the winner’s bracket and can win the Regional with a win on Sunday.

India and Dalton Back On Track

With the added pressure of having to perform with JJ Schwarz out of the lineup, Florida’s three- and four-hole batters have been struggling as of late. However, it seems Jonathan India’s and Wil Dalton’s bats have finally woken back up.

India and Dalton blasted back-to-back home runs Saturday night to put the Gators out to a 2-0 lead in the top of the fourth inning.

Dalton stayed hot after starting off the regional tournament strong —  he went 4-5 with 6 RBI in Friday’s game and was just a triple shy of the cycle. Meanwhile, India continued to have success after going 2-3 with 2 RBI in the match up against Columbia.

Junior college transfer Jonah Girand hasn’t had much playing time throughout the season but has come up big for Florida in the regional tournament so far.

After hitting his first career home run in Friday’s game, Girand sent another one out over the left field wall, giving the Gators a 3-1 lead in the top of the seventh inning.

With the Dolphins battling back in the bottom half of the frame and picking up one run, Girand’s homer turned out to be the difference in the game.

Gator coach Kevin O’Sullivan says he has always had confidence in Girand and is glad he is making the most out of his opportunity.

Brady Singer was back on the mound after being out for two weeks with a hamstring injury. He shut down Jacksonville until the fifth inning when the Dolphins pieced together a rally and were able to push one one run across the plate.

Singer shined in the sixth inning when all three Dolphin batters were caught looking at a third strike.  He faced some more adversity in the seventh after giving up a home run and allowing Jacksonville to bring the score within one but was able to escape from the inning with the lead.

Michael Byrne came in to relieve Singer in the eighth inning and struggled early, giving up a lead-off triple. But he was able to work out of the jam and strand the runner at third, retiring the next three batters in order.

Byrne came back out to close the game in the ninth. The final frame went smoother for Byrne — he picked up a strikeout and forced a fly out and pop out to end the game.

The Gators will be back in action on Sunday to face the winner of the Jacksonville vs. Florida Atlantic elimination game. The game will take place at 6 p.m. and be broadcast on ESPN 98.1 FM/850 AM WRUF.  With a win, Florida will clinch the Gainesville Regional and advance to the Super Regional Tournament next week.