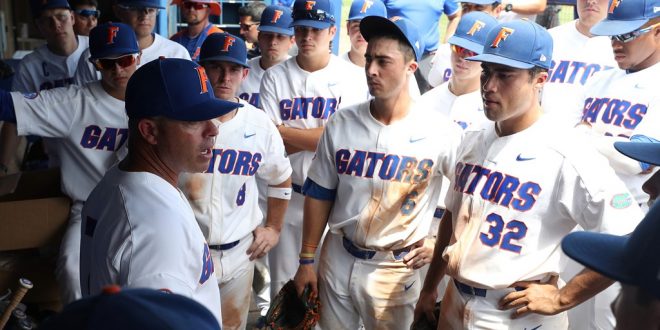 Auburn Walks It Off In Game 2 of Super Regionals

Auburn second baseman Luke Jarvis drove in the game-winning run in Sunday’s Super Regional game against the Gators with a single to left center, winning it for the Tigers in the bottom of the ninth.

A winner-take-all matchup is now set for Monday night in Gainesville, as a trip to the College World Series is on the line.

For a split second, it appeared Auburn was on its way to a win thanks to a Will Holland RBI double in the bottom of the eighth.

But, down to its last three outs, Florida battled back and tied the game up in the top of the ninth at two runs apiece on an Austin Langworthy solo shot.

Keenan Bell reached base later in the inning, but the Gators weren’t able to move him around the bases.

Jordan Buter, who entered as relief for Jackson Kowar in the eighth, returned to the mound for the ninth and issued a lead-off walk.

Gators coach Kevin O’Sullivan then made another call to the bullpen and brought in Michael Byrne.

O’Sullivan says he wanted to have his ace closer on the mound to end the game for better or worse.

Byrne quickly picked up the first out of the inning on a strikeout. He proceeded to give up a single to the next batter, putting runners at first and second.

Jarvis then stepped up to the plate and ripped a line drive to the left center gap. This scored the runner from second and won the game for Auburn in a walk-off fashion.

The pitching matchup between Kowar and Tanner Burns turned out to be the type of battle expected from Brady Singer and Casey Mize on Saturday.

Kowar threw seven innings, striking out six while walking none and allowing just three hits. The only run he gave up was on a home run in the fourth, which broke up the perfect game he had going at the time.

What a day for junior Jackson Kowar. (cc @Royals)

Burns matched the first-round draft pick pitch-for-pitch throughout his six innings. He struck out three and allowed only one run on five hits.

Reaching base wasn’t the issue for the Gators throughout the game. They had runners on in all but one inning, but weren’t able to come through with timely hitting and push additional runs across the plate.

Florida was 0-8 with runners in scoring position. There were also four innings where the lead-off batter reached base, but the Gators weren’t able to put anymore runs on the board.

O’Sullivan says Burns did a good job of shutting down Florida.

The Gators and Tigers will be back in action Monday night for a decisive Game 3.

Florida is hoping to apply what they learned from last year’s Super Regional when they went to a winner-take-all Game 3 following a walk-off win by Wake Forest in Game 2 of the series.

Kowar says he believes the team can pull through and is excited to get back out on the field.

O’Sullivan will likely look to freshman Jack Leftwich for the start as Florida attempts to return to Omaha for a school-record fourth consecutive season. Meanwhile, Auburn hasn’t been to the College World Series since 1997.