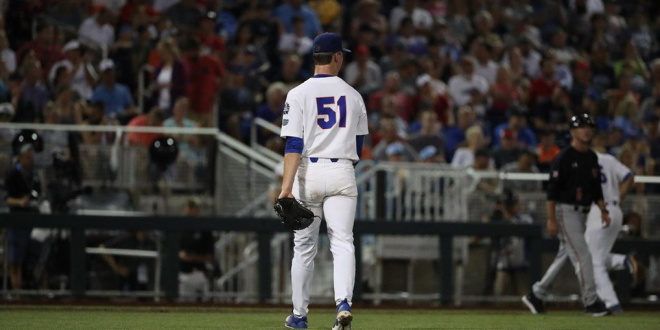 Texas Tech Takes Down Gator Baseball In Its CWS Opener

Sloppy defense and a lack of timely hitting proved to be the downfall of the Florida Gator baseball team in their opening game of the College World Series against Texas Tech.

Texas Tech now has two all-time wins in the CWS — both are against Florida.

Sunday night’s game featured a collection of defensive miscues that led to several Texas Tech runs — one of these came with runners at second and third and two outs in the top of the fifth inning.

Texas Tech’s Gabe Holt hit a ground ball to JJ Schwarz at first base, who was not able to come up with it. After the ball hit off of Schwarz’s glove, it went into right field, scoring both runners. This gave the Red Raiders a 3-1 lead at the time, and they never relinquished the lead.

Overall, Schwarz had a very underwhelming return to the Gator lineup after missing several weeks due to a hand injury. After starting most games this season behind the plate, Schwarz looked a little uncomfortable out in the infield.

He also didn’t do much to help Florida out on offense. He was 0 for 4 at the plate with two strikeouts.

Schwarz says it was good to be back but the team will now have to shift its focus to its next opponent, Texas.

The misplays throughout the game proved to be costly and didn’t help out starting pitcher Brady Singer, who did not have his sharpest stuff working for him. Singer allowed five runs and nine hits through 6 1/3 innings, but three of those runs were unearned.

Also struggling a little on the mound was Michael Byrne. He allowed his first run ever in his three trips to Omaha.

Leaving runners on base has been an all-too-familiar characteristic of Gator baseball as of late. And Sunday night was no different.

Florida was 0 for 7 with runners in scoring position and was only able to manufacture three runs, thanks in part to a two run Nelson Maldonado home run in the seventh.

Headed to the 8th, we’ve got a ballgame thanks to Nelson’s two-run homer. #LetsGoGators pic.twitter.com/HLfh3ZT2t9

The Gators had a chance to take an early lead after getting a runner to third in both of the first two innings. But a fly out and strikeout ended each inning, causing Florida to come up empty.

The Gators will be back in action in an elimination game on Tuesday at 2 p.m. ET against the Texas Longhorns. Texas dropped its first game to Arkansas 11-5.

Florida is 1-2 all-time against the Longhorns in the CWS, losing back-to-back games in the 2005 championship series, and winning 8-4 in its opening game in Omaha in 2011.

Jackson Kowar (9-5, 3.24 ERA) will be on the mound for Florida in this win-or-go-home game. In his last start, Kowar picked up a no decision after allowing one run on one hit over seven innings pitched against Auburn.

Kowar says his mindset for Tuesday’s game won’t be much different from his previous starts.

Gator coach Kevin O’Sullivan said after the game that he believes his team can bounce back.

“There’s no rewind button here. We lost. We’ve got to move forward.” — Sully on his message to team … “It’s certainly doable."