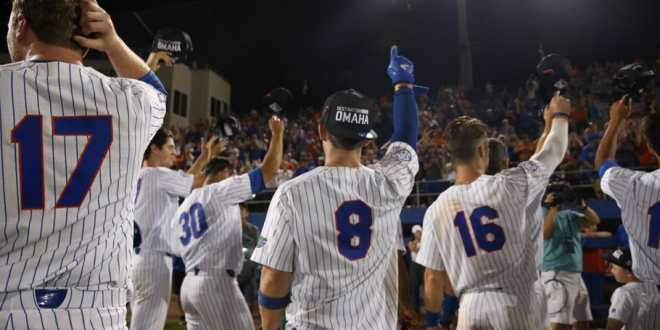 The Florida Gators (47-19) open College World Series play Sunday evening against Texas Tech (44-18). The Gators are making their fourth straight appearance in Omaha under the leadership of head coach Kevin O’Sullivan. They’re just the fifth team to do so since the tournament field expanded to 64 teams in 1999.

Throughout the season, O’Sullivan has referred to ace Brady Singer as the team’s tone setter. If they’re to spark another championship run with an opening game win, they’ll need Singer to silence the red-hot Red Raiders offense.

The Red Raiders are coached by Tim Tadlock who has been leading the group since 2013. The Gators have squared off against Texas Tech just one time in program history. That occasion was in 2016 when Florida lost by a score of 3-2 ending the team’s season.

This year Tadlock’s group has been an offensive juggernaut. They enter Sunday’s game hitting .311 as a team. The Red Raiders are one of the few teams in the country that can say they have a higher slugging percentage than the Gators. They boast a .512 mark while Florida comes in at .477.

The Texas Tech offensive attack is led by sophomore infielders Josh Jung and Grant Little. Jung is hitting a team-high .390 and is one of six players in the regular lineup hitting over .300. He also has a team-high 78 RBI this season. Little leads the group in doubles (24) and walks (40).

If Texas Tech gets aggressive on the base paths, expect them to do so via freshman Gabe Holt. He leads the team with 29 stolen bases (30 attempts). The Red Raiders offense also doesn’t lack power. Five players in the lineup have over 10 home runs. Senior Zach Reams leads the team with 17.

Tadlock hasn’t announced his pitching plans, but among the potential starters are junior right-hander Davis Martin (7-5, 4.50 ERA) and sophomore right-hander Caleb Kilian (9-2, 3.04 ERA). Martin started the elimination game against Florida in the 2016 CWS. In that outing he threw seven scoreless innings.

The burden of attempting to slow down the Texas Tech offense falls directly on Singer’s shoulders. In a press conference on Friday, Tadlock was complimentary of the way O’Sullivan has developed the Gator ace and he thinks Singer will be a handful for his team.

The Gator pitchers that have been to Omaha before have appeared in 11 games (four starts) and posted a combined 2.25 ERA in 36 innings pitched. Singer leads the way with 14 innings. Closer Michael Byrne has a 0.00 ERA in seven innings pitched.

Senior captain JJ Schwarz has been held out of action for the last three weeks with a broken hand. He’s taken batting practice on three occasions, including at TD Ameritrade Park on Friday. If he’s able to give it a go he won’t be catching so he could play at first base, where he played the majority of 2017. Schwarz was hitting .325 with 46 RBI this season prior to suffering the injury against Mississippi State.

I'm an above-average golfer with surprisingly great touch around the greens. Click on my twitter link for some sports talk.
@Ry_McGinn
Previous 2018 Russia FIFA World Cup Day 2 Recap
Next Texas Tech Takes Down Gator Baseball In Its CWS Opener