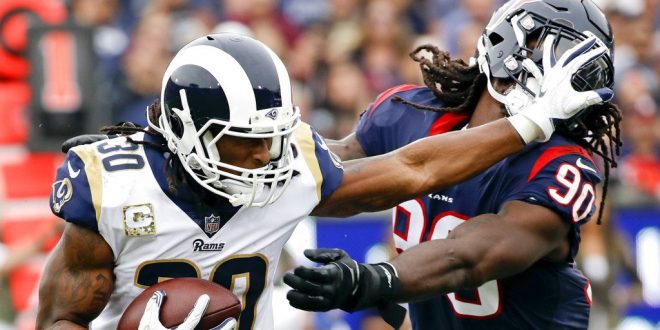 FILE - In this Nov. 12, 2017, file photo, Los Angeles Rams running back Todd Gurley pushes away Houston Texans outside linebacker Jadeveon Clowney during the first half of an NFL football game, in Los Angeles. Gurley has agreed to a lucrative contract extension with the Rams. Rams general manager Les Snead confirmed the new deal Tuesday, July 24, 2018, for the NFL’s offensive player of the year. The Rams didn’t announce the terms of the deal, but ESPN says it’s a four-year extension worth $60 million through 2023. (AP Photo/Alex Gallardo, File)

Los Angeles Rams running back Todd Gurley just cashed in on a massive payday, making him one of the highest paid running backs in the NFL.

Gurley receives largest guarantee given to a running back:

Breaking: Rams and RB Todd Gurley are finalizing an agreement on a 4-year extension worth $60 million that includes $45 million guaranteed. (via @AdamSchefter) pic.twitter.com/7mv0ECCGa3

On Tuesday afternoon, news broke that Rams RB Todd Gurley would be receiving a four-year, 60 million dollar extension that keeps him with the Rams through the 2023 season.

A deal that includes 45 million dollars of guaranteed money, which is the most ever given to a running back.

The extension also gives the star running back from the University of Georgia the largest per-year average of any NFL running back.

The new amount of money Gurley will be making provides a bit of a benchmark for other star running backs looking for new deals soon such as Pittsburgh’s Le’veon Bell and Dallas’ Ezekiel Elliot.

Gurley was already under contract through 2019, slated to make just under 10 million through his rookie contract.

His head coach, Sean McVay spoke a little bit about the extension to the media on Tuesday.

What does the deal mean for Rams star Aaron Donald?

Todd Gurley got his deal, and so did Rams wide receiver Brandin Cooks.

But what about Aaron Donald, the 2017 Defensive Player of the Year?

The star defensive lineman is set to play the 2018 season under the fifth-year option on his rookie contract.

Rams GM Les Snead on Aaron Donald: "We’re simultaneously working to make Aaron a Ram a long time – that’s the goal. I know we’ll get questions about him, but Aaron’s a big part of who we are, where we want to go. We’re going to continue working to get something done with Aaron.”

It certainly surprises a lot of people that Los Angeles would choose to give deals to Gurley and Cooks before Donald.

Not only that, but Donald has been asking for a new deal since last summer, and this bit of disrespect may cause him to holdout from training camp.

One thing is for certain though, the Rams still have a good amount of money under the cap to spend even after the Gurley deal.

And as seems obvious, they’ll be looking to sign their star defensive player to a contract extension soon that would keep him in LA for a very, very long time.