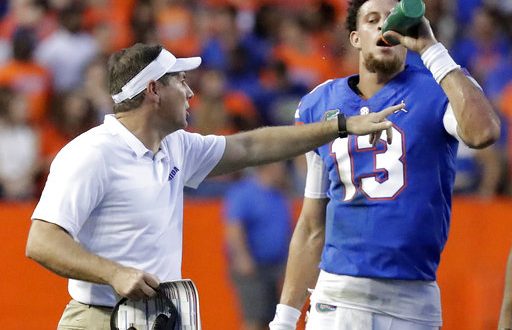 The Florida Gators will face the Colorado State Rams Saturday at 4:00 p.m. in Gainesville, FL.  Radio coverage of the game will begin at 12 p.m. on ESPN 98.1 FM/850 AM WRUF. The game will be televised on the SEC Network.

This is Colorado State’s second SEC opponent of the year. After starting the season 0-2, Colorado State held their ground against Arkansas last week. After falling behind 27-9 with 3 minutes remaining in the 3rd quarter, K.J. Carta-Samuels connected with wide receiver Preston Williams for two touchdowns. After a field goal, the Rams found themselves on the two-yard line with just 12 seconds left. This lead to the following play by Izzy Matthews:

That was only the second SEC win in program history for the Rams, and now they have a shot at another. The key area for improvement must be the running game. They are a pass-heavy team without question, as Carta-Samuels is currently 2nd in passing yards among all Division I quarterbacks. In order to start winning continuously, the Rams are going to need a wider range of options than the Carta-Samuels to Williams connection.

Just last week, the clock struck zero at Ben Hill Griffin Stadium. After an official confirmed victory, Kentucky Wildcats rushed towards the center of the field, embracing each other and jumping with joy. Senior linebacker Josh Allen paraded around the field, taunting fans with the Gator chomp. Florida fans resorted immediately to denial, screaming in disbelief that the game just ended on a questionable fumble call. Meanwhile, Gators quarterback Feleipe Franks remained on the field. After paying his respects to his opponents, he paused. For a brief moment, he was alone. Helmet in hand, Franks surveyed the chaotic scene around him. At that moment, the magnitude of the situation became apparent to him. It’s hard to imagine pushing such a scene to the back of one’s mind just to lace up a week later, but this is the reality for Franks and the rest of the Florida Gators.

THE STREAK IS OVER!!!

KENTUCKY HAS DONE IT!!! @UKFootball beats Florida for the first time since 1986. pic.twitter.com/KFw5kHvbwk

Franks was quick to accept blame after the game:

However, according to head coach Dan Mullen, winning culture requires going further than simply admitting your own mistakes. It calls for accountability for your teammates, not being afraid to tell someone that they did something wrong. It also requires the ability to openly accept constructive criticism without getting defensive. Here it is in his own words:

After what has hopefully been a week of accountability and improvement for the team, they now face a serious threat to fall below .500. The Rams are the real deal, and the Gators are treating them as such. This game makes a statement not just for Florida’s season, but it also makes a statement for the SEC. If Colorado State manages to march in and defeat two SEC teams in two weeks, then perhaps it is time to reevaluate the condition of the conference as a whole.