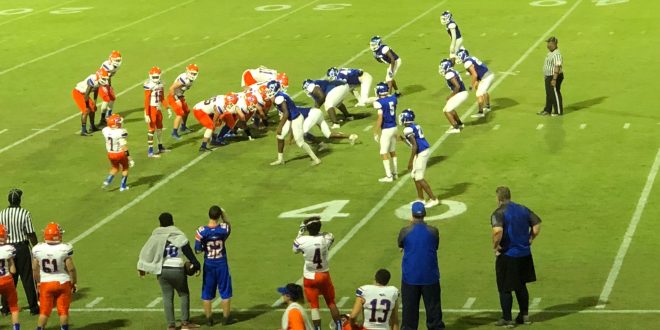 In a blowout victory against the winless Bronson Eagles, the Blue Wave gave it their all in a 76-0 victory at P.K Yonge this Friday night. The Blue Wave, who had a tough loss last week against Hawthorne bounced back and scored a whopping 11 touchdowns on the Eagles defense.

The Blue Wave have tied their previous season winning record with three wins in only the fourth game of the season. They are now ranked ninth in Class 4A and are first in District 2 standings.

The Blue Wave are handing it to the Bronson Eagles. 27-0 in the first quarter 2:40… @ESPNGainesville

P.K Yonge set the tone from the opening minutes of the game. Senior running back Israel Wilcox caught a screen pass and bolted for 60 yards and scored on their opening drive. Then, the Eagles couldn’t mount any movement on offense and they were forced to punt. After their punt, it took a 60-yard bomb to Pernell Sylvester and a 20-yard catch by the birthday boy Jacobi Byrd for the Blue Wave to score again; two plays and a quick 14-0 lead.

Afterward, an unusual sequence happened. The Eagles fumbled on the kickoff and it was recovered by the Blue Wave. Which ultimately led to another touchdown by Byrd. Blue Wave up 21-0. On the third kickoff… the Eagles fumbled again, recovered by the Blue Wave. It was hard to not notice how frustrated the Eagles sideline and fan base were, not even 10 minutes into the game and you’re about to be down by four touchdowns. Then, first play after the fumble, Sylvester takes it to the house on a 37-yard run play that gave PK a 27-0 lead with 2:40 left to play in the first quarter.

The Blue Wave scored an equal 27 points in the second quarter and it started with Israel Wilcox. He managed to score on a 58-yard run early in the quarter and made it look easy. Unfortunately for the Eagles, they fumbled again in their next possession. In fact, they fumbled a total of five times throughout the entirety of the game.

Blue Wave sophomore Phillip Miller stepped up and scored on a 30-yard run. The depth charts began to show for the Blue Wave once head coach Marcus McDonald decided to allow the bench players get some action on the field. Afterward, sophomore Quay Jones scored on a two-yard run that gave the Blue Wave a 54-0 lead late in the second quarter. But, the crowd had no idea that they were in for a fun ride in the second half.

The Eagles got the ball and achieved their first 1st down of the night early in the third quarter. Their bunch formation wasn’t quite working for them until they threw their first pass of the night. Quarterback Rafael Alicea launched a 20-yard pass to Mason Clifton that got them enough yardage.

Furthermore, the Blue Wave showed their true potential once they got their second and third stringers in the game. “I was very impressed with what our JV guys did out there,” said McDonald after the game. “I haven’t seen them play yet because of their away games but it was great to see how well they executed our offense and defense.”

Not to mention, one of those JV guys who had a great game was Quay Jones. He ended with two touchdowns and ran for over 140 yards. Not to mention, one of the final plays of the game was an extraordinary run that started off with a self-inflicted fumble that he recovered himself and cut back to the other sideline to top it off with a 60-yard touchdown. Talk about not giving up on the play.

What McDonald Had To Say

McDonald was happy with how his team won with class. Sportsmanship is a huge deal for him. But, there are still things that he and his squad need to work on.

“Pre-snap infractions, offsides, and facemasks. I was writing down the penalties which were 20 yards that were not nearly as much as we had last week but it’s not clean football and we have to play clean football, period,” said McDonald.

He continues to talk about how mistakes can make a game go from good to bad quickly.

Recent grad from the University of Florida. Editing all articles on here while helping out the newbies. Love all things basketball.
@@MarcoJMartinez_
Previous Florida vs Colorado State: Recovering After Heartbreak
Next College Football Preview: Missouri looks to inflict third straight home loss on Purdue