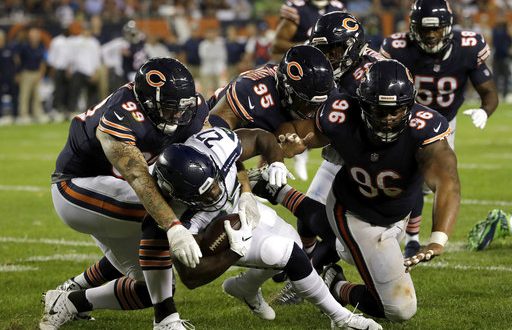 Chicago Bears Dominate on Defense to beat the Seattle Seahawks

It was too little too late on Monday night as the Seattle Seahawks tried to make a comeback on the Chicago Bears late in the game. After the Bears had been leading for most of the game holding the Seahawks to just three points, Seattle finally had a spark in the fourth. However, the Bears stopped Seattle Seahawks quarterback Russell Wilson’s offense and managed to pull out a 24-17 victory in the end.

On Monday night the Bears defense showed up for Chicago fans in their home-opener at Soldier Field.

The Bears took down Wilson, with six sacks on Monday night. The defense continued to dominate each quarter and late in the game cornerback Prince Amukamara picked off Wilson and returned it for a 49-yard touchdown.

However, Wilson and the Seahawks bounced back in the fourth with 14 points, 12 first downs and 196 yards in the. The Seahawks closed the gap and made it a 7-point game with just 14 seconds left to play. However, Seattle was not able to come up with a victory.

Wilson finished the game completing 22 of 36 passes for 226 yards with two touchdowns on Monday. Despite his team’s loss, Wilson said their late- game performance will help them later on in the season.

Chicago’s quarterback Mitchell Trubisky completed 25 of his 34 attempts throwing for 200 yards and two touchdowns. The No. 2 overall pick in last year’s NFL draft was intercepted twice in his team’s win Monday night. Trubisky says he hopes his teams continues to improve after this week’s win.

Chicago Bears head coach, Matt Nagy picked up his first career win with the Bears on Monday. Nagy said that his team’s physicality and energy for the entire game was something to be proud of.