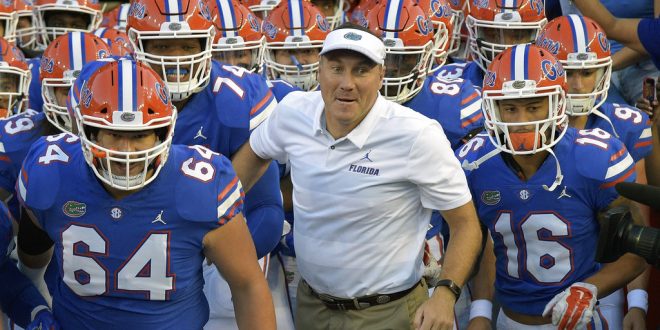 FILE - In this Saturday, Sept. 1, 2018 file photo, Florida head coach Dan Mullen, center, runs onto the field with his players before an NCAA college football game against Charleston Southern in Gainesville, Fla. Florida coach Dan Mullen never intended to call his players soft after a 27-16 loss to Kentucky. Mullen says he was referring to how they played while losing to the Wildcats for the first time in more than three decades. (AP Photo/Phelan M. Ebenhack, File)

Florida football head coach Dan Mullen’s six-year $36.6 million contract has been signed and finalized with the university. Dan Mullen is 2-1 overall with his new team but lost to the only conference matchup against the Kentucky Wildcats back on Sept., 8. But, if they continue their gradual momentum after a big win against Colorado St. last week, then Mullen is in for a big payday.

Show Me The Money

The University Athletic Association released his contract details on Monday, per a routine records request. Mullen will be making $6,103,000 annually. Furthermore, his base annual salary is $3 million. But, he receives an additional $3.1 million a year for media and public relations responsibilities and other expenses, according to the Gainesville Sun. Those other expenses include an annual pay of $200,000 for any expense and $70,000 for reserved airplane usage, according to 247sports.com.

You can see the expanded details below

Every contract has a buyout clause if the relationship between the company and the employee doesn’t work out. In this case, Florida will pay Mullen $12 million or whatever’s left on his contract if it’s lower than $12 million. Also, half of it will be paid out within 30 days of his firing. The remaining installments will be paid out in annual installments over the next six years in annual compensation.

Florida has dug themselves a financial hole with each coach they’ve hired. For instance, Florida is almost done with paying out former head football coach Will Muschamp. They still owe Muschamp one final payment of $787,500 this upcoming November.  Plus, Florida still has three more payments to former coach head football coach Jim McElwain.  $1 million to be exact on July 1 for the next two years, before a final payment of $500,000 on July 1, 2021.

Well, what happens if Mullen decides to leave Florida before his contract is up? As a result of leaving early, he’ll owe the Gators $2 million.

Recent grad from the University of Florida. Editing all articles on here while helping out the newbies. Love all things basketball.
@@MarcoJMartinez_
Previous Chicago Bears Dominate on Defense to beat the Seattle Seahawks
Next Feleipe Franks on Florida facing Tennessee: We’re up for the Challenge