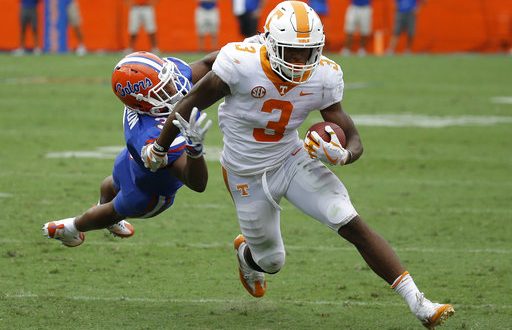 In his first season as Florida’s defensive coordinator, Todd Grantham is working to build a physical defensive identity for the Gators as they prepare to play Tennessee.

After giving up 303 rushing yards and 454 total yards in a loss to the Kentucky Wildcats, the Gators’ clearly had some defensive improvements to make. While Colorado State is less of a challenge than the Wildcats, Todd Grantham saw some positive improvements from his defensive unit. The defensive line and stopping the run is a top priority for Grantham in improving their defense. In a 48-10 win, the Gators held the Rams to 70 rushing yards and forced three turnovers. However, Colorado State was able to sustain drives as they totaled 310 total yards and had possession for over 38 minutes. Still, Grantham said he sees the Gator defense as trending in the right direction.

Grantham said he saw progress this week, but he is focused on developing a certain standard and identity from his team.

Continued improvement is needed to play to the #GatorStandard.

The Gators currently sit at 2-1 on the season, but they are 0-1 in SEC play. This week, the Gators will need to prove themselves on the road against the rival Volunteers. Tennessee, also 2-1 this season, has had a lot of success running the ball. They’re averaging over 220 rushing yards a game. With the team’s emphasis on getting better at stopping the run, this week will be a real challenge for the Gator defense. Between running backs Tim Jordan and Ty Chandler, Todd Grantham said he knows how good they are.

On top of Tennessee’s run game, Grantham noted that Volunteers’ quarterback Jarrett Guarantano has been playing well and completing more than 70% of his passes so far this season.

While Todd Grantham and the Gators’ defense try to improve, they should be getting a boost this week with the return of David Reese. The Junior linebacker is a veteran on the field and a leader on defense. Reese is a solid tackler and should help the Gators contain Tennessee’s rushing attack. Grantham spoke about the effect of adding Reese back to the lineup.