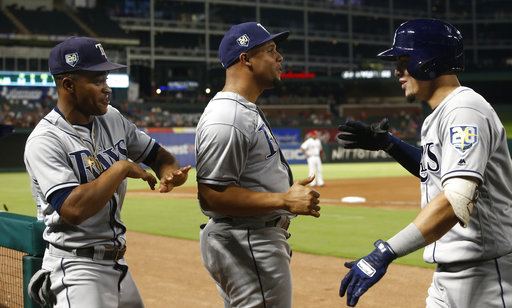 After defeating the Texas Rangers 4-0, the Tampa Bay Rays are just 5.5 games back of the final AL Wild Card spot.

For the second straight game, the Rays picked up a win against the Rangers without giving up a run. Monday saw the Rays grab a 3-0 victory, and on Tuesday the score was 4-0. The Rays have limited Texas to just 6 combined hits over the two games and have had 23 combined hits themselves. The 4th inning was where Tampa Bay did most of its offensive damage, scoring three of their four runs in the frame. Willy Adames and Joey Wendle led the way offensively for the Rays. Although Adames went just 1-5 in the game, he got the Rays on the board in the 4th inning with his 10th home-run of the season, a two-run shot. Wendle went 4-5 in the win and recorded an RBI double as well as one run.

Tampa Bay’s pitching has been a strong suit for them over their hot streak with pitcher Blake Snell leading the way. He picked up his 20th win of the season, becoming the first MLB pitcher to do so since the 2016 season. Snell, the 25-year-old lefty, has had an incredible turnaround from last season. Snell had a 5-7 record, a 4.04 ERA and was demoted to Triple-A. This season he is 20-5 with a 1.97 ERA and 200 strikeouts.

The Rays have been absolutely locked in for the last month. On Aug. 18, the Rays lost to the Red Sox to drop to 62-61. Since then, they have gone 21-5 and have vaulted themselves into the American League playoff race. They are now just 5.5 games back of the Oakland Athletics for the second Wild Card spot. Tampa Bay is also 8 games back of the New York Yankees, who possess the first AL Wild Card position at the moment. With just 12 games remaining in the regular season, every game is crucial for the Rays. A critical series that could determine Tampa’s playoff fate is Sept. 24-27 when they host the Yankees. The Rays are playing extremely well, but it will still take the right amount of luck to push them into the playoffs.

Closing out the Rangers

The Rays can’t get ahead of themselves as dropping any game might mean an end to their playoff hopes. On Wednesday, they will try to complete a sweep of the Rangers. Diego Castillo will start at pitcher for Tampa Bay with a 3-2 record and a 3.24 ERA. Yohander Mendez will start at pitcher for Texas. The first pitch will be at 2:05 p.m. Eastern from Globe Life Park in Arlington.