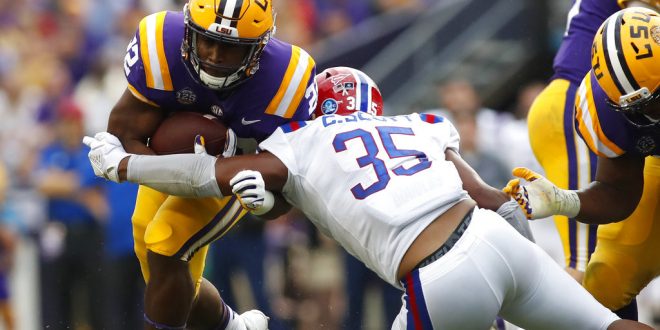 The 102nd meeting between the Ole Miss Rebels and the No. 5 LSU Tigers takes place Saturday.

The Rebels are hoping for their first conference win of the season while the Tigers are looking to remain undefeated. Ole Miss suffered an embarrassing 62-7 beating at the hands of No. 1 Alabama two weeks ago, but the Rebels were able to recover with a 38-17 victory over Kent State last week.

And for the Tigers, even though they picked up the 38-21 win last week against Texas Tech, it was far from one of their better games of the season. With the injuries to the Tigers offensive line and the Rebels’ passing game, LSU will be on upset watch this weekend at Tiger Stadium.

The Rebels racked up 651 yards of total offense last week behind quarterback Jordan Ta’amu and running back Scottie Phillips. Ta’amu leads all SEC quarterbacks in passing yards with 1,359, and the only SEC running back with more rushing yards than Phillips is Kentucky’s Benny Snell.

Though they only crossed the end zone once in their loss to Alabama, the Rebels have put at least 35 points on the board in each of their three wins this season. That includes their 76-41 clobbering of Northern Illinois on Sept. 8, a game that saw Ta’amu throw five touchdown passes for 448 yards.

Ole Miss’s has proven its ability to explode on offense multiple times this season, averaging 348 yards through the air per game, and LSU coach Ed Orgeron knows that his team has to take advantage of the matchups to have success against receivers like A.J. Brown and D.K. Metcalf on Saturday.

Defense will keep the Tigers in the game. The Tigers may not have the high-flying offense that the Rebels do, but they have experienced linemen who know how to stop the run. The Tigers defense has allowed fewer than 90 yards on the ground against each team it has face this season outside of Auburn, who collected 130 rushing yards.

LSU has a banged up offensive line and is struggling with depth from its front five, so the Tigers will depend on their defense defense to not only contain the run but get key stops in the red zone that will keep them in the game

The Tigers will host the Rebels at Tiger Stadium in Baton Rouge at 9:15 p.m.