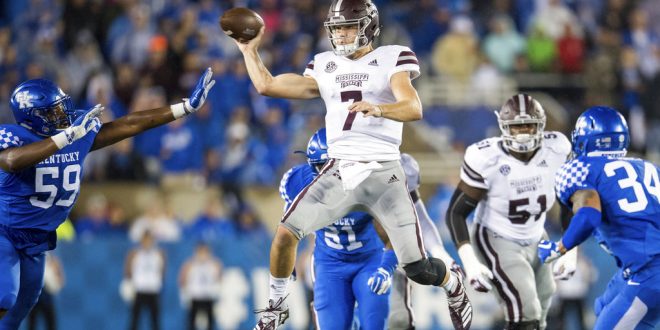 CFB Preview: Will Mississippi State bring their A-game against Florida?

Last week, the Mississippi State Bulldogs had a game to forget against the Kentucky Wildcats. At No. 14 in the AP poll prior to Saturday’s contest, the Bulldogs whimpered at the ferocity of the Wildcats rushing attack.

Despite UK quarterback Terry Wilson not being much of a factor in the game, MSU still suffered behind the smoking trails of running back Benny Snell. The junior gashed Mississippi State on the ground to the tune of 165 yards on 25 carries. Snell had all four touchdowns in the game for UK, including two in the fourth quarter to shut the door.

Now, with the Florida Gators coming to town, the Bulldogs will have to find a way to combat UF’s fierce rushing attack.

Prior to the defeat against Kentucky, the Bulldogs had stifled their opponents on the scoreboard. Through the first three games, Mississippi State’s defense had given up a combined 26 points to start the season. But the first real challenge in Benny Snell saw its defense fold at times.

However, coach Joe Moorhead was already looking ahead after the loss and says the team responded well in practice on Sunday.

“We came in on Sunday, watched the film, graded it and made the corrections,” Moorhead said. “Now we’re moving forward and excited for the opportunity for our SEC home opener.”

He also took some responsibility at the Monday press conference for the team’s poor performance. According to Mississippi State beat reporter Joel Coleman (@JoelTColeman), Moorhead said the team played “below its standard” against the Wildcats, among other things. He also expects the team to cutback on unnecessary penalties.

Following the loss to the Wildcats, it wasn’t evident to just the staff that something needed to be done. Nick Fitzgerald, the Bulldogs starting quarterback, called a players-only meeting leading up to the game against Florida.

While the specifics of what was said in the meeting haven’t been revealed, Fitzgerald told reporters that it needed to happen. He said everything they covered was “necessary”, and the team now needs to focus on the game.

Mississippi State’s defense wasn’t alone in its struggles against the Wildcats. The offense had a total of 201 yards and failed to score after the second quarter. Fitzgerald, touted as one of the better quarterbacks in the SEC, completed only 50 percent of his passes and threw for only 145 yards. He was also intercepted once during the game and was sacked on three separate occasions.

But one thing that can help the Bulldogs against Florida’s defense is a factor the Gators struggled with early in the season: a running quarterback. Fitzgerald has the ability to make plays with his legs and has done so when he can.

When Florida went up against the Wildcats dual-threat QB, the Gators were exposed on the defensive side. Wilson went wild to the tune of 105 yards on 10 carries with a score.

If Fitzgerald can replicate even half of Wilson’s performance, then the Bulldogs should have a chance to open up the field and key in on the weaknesses of UF’s defense.

Kentucky did a masterful job of setting up this touchdown run. With Benny Snell being as productive as ever, defenses have to honor the direction he's going. Terry Wilson made Florida pay for that here. The entire defense is out of position by the time he makes his cut pic.twitter.com/0l4lXiyncO

The Bulldogs await the Gators arrival for the Saturday matchup. Kickoff is set for 6 PM and can be seen on ESPN.