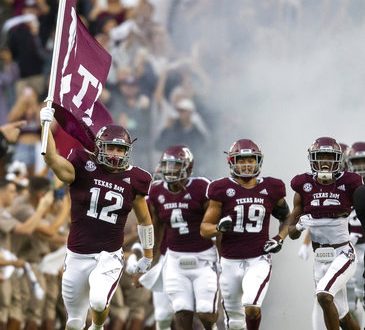 The Arkansas Razorbacks and the Texas A&M Aggies are gearing up to play in the Southwest Classic on Saturday. This heated SEC rivalry will meet in the AT&T Stadium in Arlington, TX. Both teams are seeking wins to bolster their standing in the SEC West.

It's time now to BELIEVE what can happen. pic.twitter.com/r4zrKgdCfy

So far, this has been a tough season for the Razorbacks. They have not won a game since their season opener against Eastern Illinois (55-20) on Sept. 1. Leading up to this week’s rivalry game, Arkansas has come up short to Colorado State, North Texas, and most recently Auburn, giving them an 0-1 conference record.

This week’s game has a lot riding on it because it will crucial to their standing in the SEC and their history with Texas A&M. They have unfortunately fallen to the Aggies in their last six meetings, which could potentially cloud their perception of the team this year.

Head coach Chad Morris is looking to showcase what Arkansas is capable of, actively preparing his team to play his alma mater this weekend.  Here are his thoughts on how his men need to prepare to psychologically face this week’s game:

The Streak Continues for Texas A&M

Texas A&M has defeated Arkansas six years in a row, clinching the Southwest Classic trophy for the past six years. ESPN’s Football power index predicts that they have a 92.7% chance of extending that streak to seven years.

Both teams are coming off in-conference losses this week, so a win for either team is crucial as they prepare to face the rest of their schedules. Although both teams have new head coaches this year, Texas A&M’s Jimbo Fisher has a lot of experience coaching high intensity games, upon joining the Aggies this season after he left Florida State last year.

The Aggies will play the #1-ranked Alabama Crimson Tide after Arkansas, so execution and precision are key to their ongoing success.

Watch the Arkansas Razorbacks play the Texas A&M Aggies in the Southwest Classic on Sept. 29 at 12 p.m. ET on ESPN.

3rd-year Telecommunications student at the University of Florida. Also a member of the Women's Track and Field team.
Previous Kevarrius Hayes speaks on Gator basketball as season approaches
Next SEC Preview: Tennessee Travels to Athens to Face No. 2 Georgia