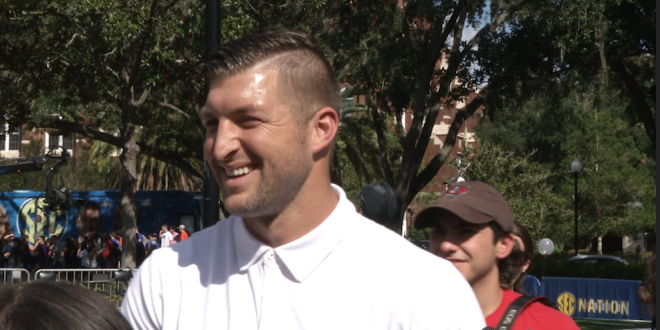 Tebow Speaks Ahead of Ring of Honor Induction

Former Florida Gators quarterback Tim Tebow spoke to the media on Friday ahead of his induction to the Ring of Honor at Ben Hill Griffin Stadium during Saturday’s matchup with LSU. Tebow and his teammates on 2008 National Championship will also be honored Saturday.

SEC Network reporter Laura Rutledge returns to the campus where she spent her college years. Rutledge covered the Gator football team in 2008 as a student beat reporter. She was very reminiscent of her time as a student  and covering the team. She shares her memories from the championship season.

SEC Network analyst Marcus Spears had his share of Florida-LSU moments as a star defensive linemen for LSU. He says he has gained respect for Florida and how hard it is to win in The Swamp.

He also believes the quarterback play for both teams will be the key to winning Saturday’s Top 25 showdown.