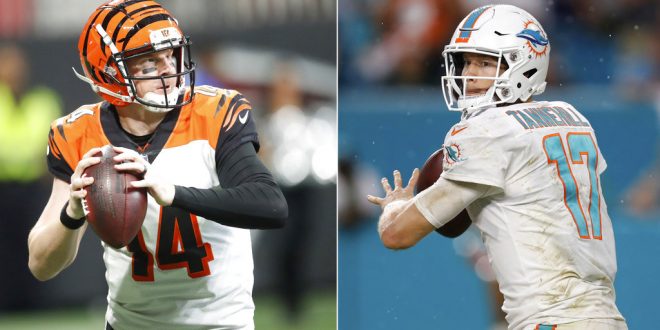 The 3-1 Dolphins are back on the road heading up to play the Cincinnati Bengals who are also 3-1.

The Dolphins started the season with a strong 3-0 record, but had a reality check against the New England Patriots. Tom Brady and the Patriots defeated the Dolphins 38-7 last Sunday.

The Dolphins defense gave up 38 points, but there is not much you can do when Tom Brady gets in his zone. The Patriots came off of a loss the previous week and came at the Dolphins with a chip on their shoulder.

Dolphin quarterback Ryan Tannehill was 11 of 20 for only 100 yards and only one touchdown pass. He needs come back this week with a sense of grit and determination after his performance against the Patriots if they want a chance at winning this game.

As the first quarter of the season comes to an end for the Miami Dolphins, Week 5 is here and they have a clean sheet. However, this Sunday’s game will be a difficult match up against a solid Bengals team.

The last time these two teams met was September 29, 2016 when the Bengals hosted the Dolphins. The Bengals walked away with the 22-7 win by only allowing one touchdown and leading with their defense.

Despite last year’s result, if the Dolphins are able to win this game it will be the first time since 2003 that they will start their season 4-1.

Ryan Tannehill has a very different mindset for this week.

The Dolphin’s quarterback says “Were 3-1. We’re out of the first quarter of the season with a bad taste in our mouth after Sunday’s loss. We get to reset 0-0 as we start this second quarter and we have to find the way to be 1-0.”

We have your gameday preview ahead of our week five matchup against the Bengals and more.

Like the Dolphins, the Bengals start their season with a 3-1 record. Despite this similarity in the stats, the Bengals are still projected to have a much higher advantage to win this game.

Coming off a win in Atlanta, this team is fueled and excited to be playing at home. Their uptempo offense and reliable defense throughout the last four weeks have been impressive and certainly gives them a good opportunity to win this game.

Tune in to CBS this Sunday at 1pm to witness this conference showdown.