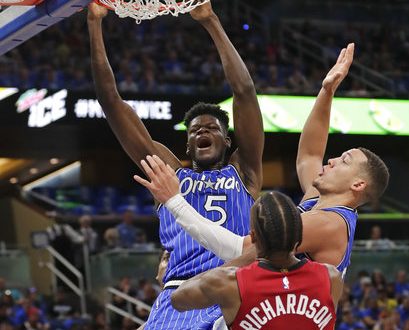 There was some Magic in the air Wednesday night in Orlando’s Amway Center. In each team’s opening game of the regular season, the Orlando Magic edged out the Miami Heat 104-101.

Despite a good start and a rally to close out the game, Miami’s downfall was their shooting. They made just 38 of their 97 shots, which is a mere 39 percent.

Contributions Off the Bench

One impact player of the game was Orlando rookie Mo Bamba. He came off the bench and recorded 13 points, seven rebounds, and two blocks in the 25 minutes he was on the court. This includes a key block during a 9-0 Heat run in the fourth quarter.

“I was so nervous going out there, but it was everything that I expected. It was a fun game to play in,” said Bamba.

Orlando’s entire bench — made up of Bamba, Terrence Ross, Jerian Grant, and Jonathan Simmons — finished the game with 36 points, 18 rebounds, and seven blocks.

On the other side of the ball, Miami’s Dwayne Wade entered the game from off the bench at the 8:22 mark of the first quarter. In his 26 minutes played, Wade scored nine points and picked up 11 rebounds.

Heat head coach Eric Spoelstra says he isn’t going to push it with the 16-year veteran.

“I’m not going to play him playoff minutes, or anywhere near that, right now,” said Spoelstra. “He knows how to approach an 82-game season even better than I do.”

With 7:50 remaining in the game, the Magic held a 92-81 lead. But Miami’s players weren’t going to go down easy. Josh Richardson, Goran Dragic, and Bam Adebayo helped the Heat come back down the stretch.

Orlando opened the door for Miami after missing three free throws in the final seconds, but Orlando slammed it shut once Richardson dribbled the ball out of bounds and Evan Fournier made two free throws with just 1.6 seconds left. Miami threw up a half-court desperation shot at the end of the game but was not able to knock it down.

The Magic will look to keep up their momentum in their next game when they host the Charlotte Hornets on Friday at 7 p.m. The Hornets came up just short in their first game of the season against the Milwaukee Bucks, losing 113-112.

Meanwhile, the Heat will hope to bounce back from their loss when they face the Washington Wizards Thursday at 8 p.m. This will be Washington’s season opener.