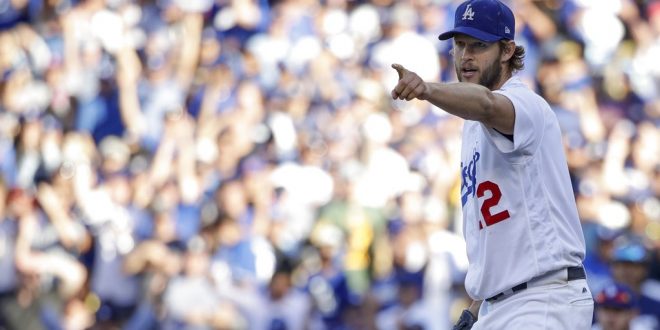 Los Angeles Dodgers's Clayton Kershaw gestures after an out during the seventh inning of Game 5 of the National League Championship Series baseball game against the Milwaukee Brewers Wednesday, Oct. 17, 2018, in Los Angeles. (AP Photo/Jae Hong)

Dodgers Take Lead In The NLCS

After hosting three games in Dodger Stadium, the Los Angeles Dodgers now lead the Milwaukee Brewers in the National League Championship Series three games to two. Going into last night’s game the series was tied but now with one win away, the Dodgers could be heading right back to the World Series.

Baseball fans were expecting Clayton Kershaw to start for the Dodgers and Wade Miley to start for the Brewers but both players and fans got someone different. The final score last night was 5-2. Five runs also equaled the total number of pitches Miley threw for Milwaukee. Yes, only five total pitches were thrown before Brewers manager, Craig Counsell marched to the pitching mound.

Wade Miley departs in the 1st inning after facing one batter and the ball is handed over to @B_Woody24. #OurCrewOurOctober pic.twitter.com/pCnTwqshQY

The Dodgers definitely won last nights’ matchup competition. With one of his worst pitching performances in Game 1 of the series, Kershaw put that aside and delivered one of his best this season. He didn’t allow a single Milwaukee baserunner after the third inning and only allowed one run on three hits through seven innings.

Kershaw says he is thankful the team is where they are now.

It wasn’t until the fifth when LA fans got out of their seats to cheer with their blue towels. The Dodgers settled in scoring five runs over the fifth, sixth and seventh inning. LA third baseman, Justin Turner said the team has talked about this moment and getting to the world series since spring training.

On the other side of things, although Milwaukee was the first to get on the board, they struggled to put together enough runs in Game 5. After back-to-back doubles in the ninth, the Brewers looked like they might have found a new breath. But with only one extra run scored, the game ended quickly after.

Even after last night’s loss, Milwaukee manager Craig Counsell still thinks his team is in a good spot.

Up next, the two teams will have a deserved day off before playing in Game 6. Los Angeles will now leave Dodger Stadium and they will have two chances to win just one more game to secure a trip back to the World Series.

So close to a chance at redemption. #NLCS pic.twitter.com/fTGCLY6nTp

And on the other hand, the Brewers will rely on home field advantage at Miller Stadium to try to pick up two more wins. If Milwaukee can pull it off, they will be heading to the World Series for the first time since 1982.

First pitch at Miller Stadium on Friday is scheduled for 8:39 p.m.

Junior studying telecommunications- news at the University of Florida. Multimedia Sports Reporter for ESPN Gainesville as well as a Multimedia Journalist for WUFT News.
@acheney21
Previous ALCS: Red Sox One Win Away from Clinching Pennant
Next Orlando Magic Defeat the Miami Heat in Season Opener