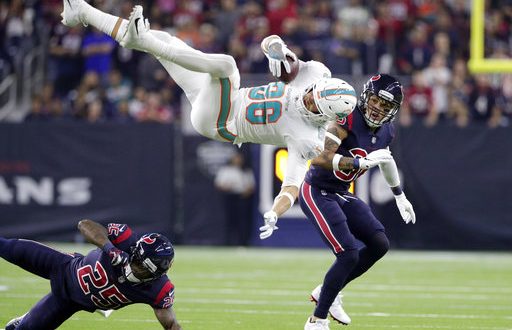 The Miami Dolphins’ defense was no match for DeShaun Watson and the Houston Texans.

However, in the second half the Texans were able to give themselves more of a lead scoring 28 points. The rushing offense for the Dolphins struggled only putting up 116 total yards. Also, injuries have hurt the Dolphins in the receiving game with WR Kenny Stills and TE A.J. Derby out.

Another player that has had to step up due to injuries is QB Brock Osweiler, due to Ryan Tannehill being out with a shoulder injury. This was Osweiler’s third start since Tannehill went down, where he’s gone 1-2 at starting QB. Thursday night Osweiler went 21-37  for 241 yards, and 1 INT. Though the Dolphins rushing struggled, Kenyan Drake lead the team with 12 carries for 58 yards and 1 TD. In the receiving game, DeVante Parker had 6 receptions for 134 yards.

Thoughts After the Game

Miami head coach Adam Gase says it was mistakes that hurt the team. He’s also mentioned that he’s going to use the time before the next game to go over film and figure out what they need to improve on.

Miami QB Brock Osweiler says that it’s the little things the team needs to work on looking ahead.

Osweiler also mentioned that moving the ball better is something the Dolphins need to improve on.

For the Texans, QB DeShaun Watson expressed how the team was all smiles during their win against the Dolphins.

Miami Dolphins will host the Jets on November 4 at 1 p.m.

Houston plays the Denver Broncos next on the same day at 4:05 p.m.