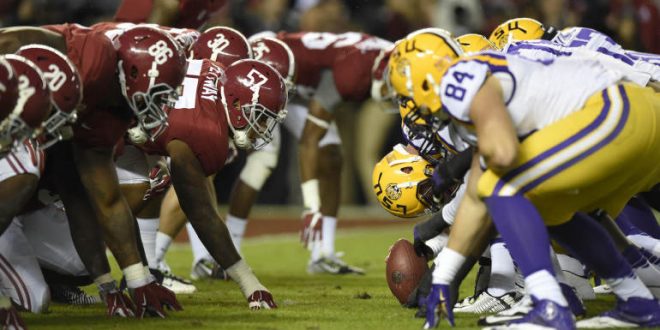 Tuscaloosa, AL, USA; General view of the line of scrimmage between the Alabama Crimson Tide and the LSU Tigers during the second quarter at Bryant-Denny Stadium. Mandatory Credit: John David Mercer-USA TODAY Sports

Weekend Preview: A wild slate set for Saturday in CFB

Halloween has come and gone, but there are still plenty of treats to indulge in with a jam-packed college football schedule this weekend. Eight of the top 20 teams will play each other on Saturday with many CFB playoff hopes on the line.

From the SEC to the Big Ten, there are plenty of reasons to plant yourself on the couch and enjoy your Saturday.

It’s the talk of the land, the game of the season. It’s College Gameday’s next destination.

In Baton Rouge, the undefeated Crimson Tide will face their toughest challenge of the season when they travel to Tiger Stadium to take on LSU. Both teams go into Saturday’s contest off a bye week with plenty of time for preparation.

We. Are. Not. Scared.
We’re Not Backing Down! pic.twitter.com/A3r7srW5Ev

Alabama is coming off a blowout win on the road against the Tennessee Volunteers. Quarterback Tua Tagovailoa had another outstanding game, completing more than 65 percent of his passes. He collected over 306 yards through the air, threw four touchdowns and didn’t turn the ball over. Tagovailoa has yet to throw an interception this year, and has fumbled only once through eight games.

On the other side, LSU is looking for its third straight win over conference opponents after beating Mississippi State and Georgia in the last two games. Head coach Ed Orgeron said that the Tigers will look to share the ball throughout the offense and get the rock in the hands of different playmakers this weekend.

At the moment, Vegas has LSU as a 14.5 point underdog at home.

Kickoff is set for 8PM and will air on CBS.

SEC: No. 6 Georgia Bulldogs vs. No. 11 Kentucky Wildcats

Overshadowed by the top-5 matchup of ‘Bama and LSU, a battle in the animal kingdom will happen to the north of Baton Rouge. The No. 6 Georgia Bulldogs will travel to Lexington to take on the SEC East-leading Kentucky Wildcats.

Georgia, coming off a 36-17 win over the Florida Gators, hasn’t left the top-10 this season, while Kentucky is creeping behind the top-10 like they have for the last three weeks.

As cliché as it sounds, Saturday’s game means everything to these two teams. The winner of this game, barring any unforeseen circumstances, should take home the SEC East crown and solidify a spot in the SEC Championship. The other side most likely sees its CFB Playoff hopes evaporate as the end of the season approaches.

For Georgia, big games like this are common. This Saturday will be the third straight top-15 opponent the Bulldogs have to prepare for. Just last week, the Bulldogs bulldozed their way to victory in the second half over a less experienced Florida side. But the game before, then No. 13 LSU gave Georgia fits, beating the Bulldogs in Tiger Stadium.

For Kentucky, big games like this don’t come often. This year has been a surprise to many in the college football landscape. The Wildcats, however, have looked like they belong in the conversation all season. Victories at Florida, at home against Mississippi State and South Carolina have given Kentucky a head of steam as the season winds down.

At the moment, Vegas has Georgia as road favorites, with a nine point spread set for Saturday’s contest.

This game will precede the ‘Bama/LSU contest on CBS, with the Bulldogs and Wildcats set to begin at 3:30PM.

Up in Ann Arbor, Big Ten football will be near its best as the Nittany Lions travel west to take on the Michigan Wolverines. A top-15 matchup, Penn State hits the road trying to deplete the hopes of Michigan fans everywhere. With a 7-1 record and on the outside looking in regarding the CFB playoff picture, the Wolverines need every win possible to keep their playoff hopes alive.

As for Penn State, their 6-2 record has their playoff hopes looking bleak. A win against the Wolverines would benefit them in the rankings, no doubt. However, two losses and a third place spot in the Big Ten standings has Penn State out of the conference championship at the moment.

With that said, a battle should ensue at The Big House as these teams fight for their postseason hopes. Both teams head into Saturday averaging over 35 points/game with playmakers on both sides of the ball.

Penn State’s junior RB Miles Sanders goes into the weekend with 834 yards on the ground. Those numbers are good enough for 15th in the entire nation. Michigan, on the other hand, has a back that can tote the rock as well. Senior RB Karan Higdon is 16th in the nation — right behind Sanders — with 831 yards on the ground.

It’s a big one on Saturday. #GoBlue pic.twitter.com/EMPKyhX8Dz

The ability to stop each other’s running game should be the key for both defenses and could decide Saturday’s contest.

At the moment, Vegas has the Wolverines as home favorites with a 10.5 point spread set for the weekend.

This Big Ten matchup can be found on ESPN around the same time as the UGA/UK contest. Kickoff is set for 3:45PM in Ann Arbor.