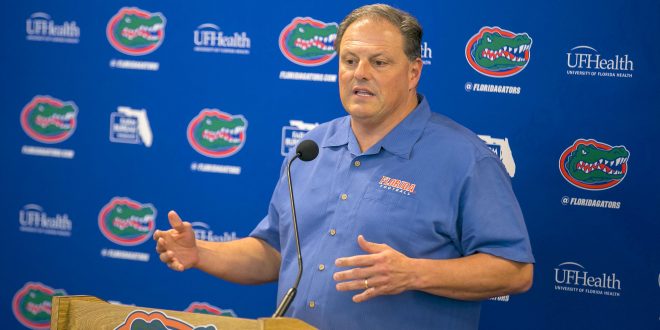 Florida football was in a dark period the past few years, but Head Florida football coach Dan Mullen has brought the team back into the spotlight. Mullen, who previously coached at Mississippi State. brought his staff to revamp the Gator football program. Gator football defensive coordinator, Todd Grantham was one of those staff members who seems to truly be making an impact to the program.

A massive growth is for sure visible. Since the start of the season, Grantham’s main focus has been to improve on the overall aggression among the defensive line. The Gators are now 6-2, compared to last year’s 4-7 record. This change is arguably due to Grantham’s immense impact on the team.

The Gators are coming off of a loss over SEC Rival Georgia. But the Gator defense helped Florida stay close throughout the game. However, Grantham says there’s always room to grow and learn.

The players are aware of their mistakes, due to the emphasis Grantham puts on the necessary adjustments his players must make. He understands that showing players their errors  and also showing them the corrections that they made following, displays a large amount of effort by the players. This highlights that they are doing good.

The Florida defense continues to advance due to many new improvements such as: communication, confidence and practice. As a group, this team is playing faster and more physical.

“We play as a team…which if you do that then you’re going to be good,” says Grantham.

No More Misery From Missouri

The Gators are shifting their focus towards the Missouri Tigers. Last season the Tigers defeated Florida 45-16 in Columbia. The Gators don’t want a flashback of last season and they seem to be on a completely different path this season. The defense will look to not give away free points and downs. Grantham says this all goes down to fundamentals of holding the other team to a low number.

Florida will look to continue their aggressive defensive efforts, and to avenge the Tigers after last season’s demolishing. The Missouri Tigers will come to Gainesville Saturday for a 4 PM game in the Swamp.

Previous Weekend Preview: A wild slate set for Saturday in CFB
Next Missouri Prepares for Florida