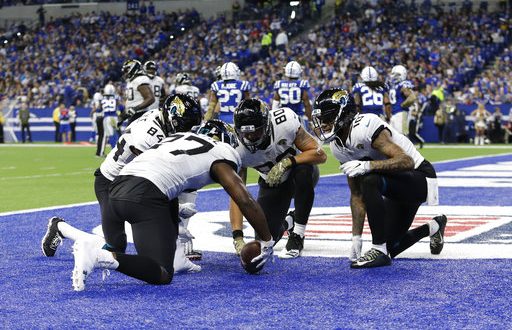 Jacksonville Jaguars running back Leonard Fournette (27) celebrates a touchdown with teammates against the Indianapolis Colts during the second half of an NFL football game in Indianapolis, Sunday, Nov. 11, 2018. (AP Photo/AJ Mast)

This time last year, the Jacksonville Jaguars ended week 10 on a three-game winning streak with a 6-3 overall record. Fast forward to week 10 in this season, the Jaguars are on a five-game losing streak after Sunday’s tough 29-26 loss against the Indianapolis Colts. The Jags are now the reverse of last season, with an overall record 3-6.

In the beginning of October, the Jags were 3-1 and in first place in the AFC South. Now, Jacksonville is in last place after losing to all three AFC South teams (Texans, Titans and Colts).

Are the playoffs out of the question?

“People are believing, and we’re ready to fight, and we just got to get back to the drawing board and get it done,” Defensive tackle Abry Jones says.

“There were made errors during the game and they capitalized on that,” Coach Doug Marrone says.

A good defense can win a game; a bad defense can lose a game. Jacksonville’s performance on Sunday was a clear example of that. In the first half, the Jaguars allowed four touchdowns and 306 yards. While the defense made a comeback to hold the Colts’ offense scoreless, that was not enough to secure a win.

Communication also seems to be a problem spot for the team. While the Colts had an impressive first-half performance, Jacksonville’s defense struggled during multiple plays. Defensive linebacker Telvin Smith, cornerback Jalen Ramsey and safety Barry Church were caught looking at each other and teammates after blown coverages, showing there is a lack of communication among players on the field. In addition, Ramsey seemed in the wrong position in two major plays: during the first-down, 53-yard touchdown reception by Colts tight end Eric Ebron and again in the second half before a 12-yard touchdown by Ebron.

“The things that were done beforehand are taking the game away from us,” Marrone says.

The Jags will be back home on Sunday to host the Pittsburg Steelers at 1 p.m.