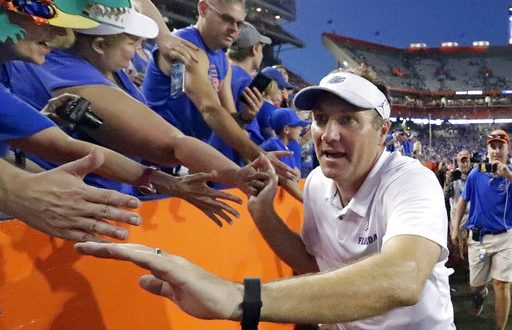 FILE - In this Saturday, Oct. 6, 2018, file photo, Florida head coach Dan Mullen celebrates with fans as he leaves the field after defeating LSU in an NCAA college football game in Gainesville, Fla. A week ago, the SEC had four teams in the top eight: No. 1 Alabama, No. 2 Georgia, No. 5 LSU and No. 8 Auburn. Instead, LSU, Auburn and Kentucky lost, allowing the three teams that beat them to either remain ranked or enter the AP Top 25. (AP Photo/John Raoux, File)

Two weeks ago, the Florida Gators football team was in the running for the SEC Eastern Championship. Last weekend, Florida entered the game on Saturday with a 6-3 record and back-to-back losses. Many fans were unsure of which Gator team was going to show up at the 12 a clock kickoff time in Gainesville. But in a late-game comeback, the Gators topped the Gamecocks 35-31 to snap their two-game losing streak.

Franks finished the game on Saturday against South Carolina running it on a 4-and-1 with the Gators down 28-31.

Here's (plenty of) the 5⃣2⃣8⃣ total yards from the 35-31 comeback victory in The Swamp!#RelentlessEffort pic.twitter.com/1H93VtvY4Y

Franks said he wasn’t able to see the play call from the sideline and went into the huddle to make a call that lifted his team to a 35-31 lead on the Gamecocks. Mullen said Franks made the right call that they were signaling on the sideline though, anyway. He even joked that if Franks had run it right the two plays before, he wouldn’t have had to run three times in a row.

Florida fans got to walk away from Ben Hill Griffin Saturday in a happier mood than when they lost their homecoming game the week prior. Likewise, Dan Mullen entered his locker room with a bit of a happier spirit as well.

Sophomore receiver, Kadarius Toney who has played multiple roles on  Florida’s offense this season has said that he wants the ball more. Despite the team’s uncertainty when Toney gets the ball at times, Mullen said he’s definitely improved as a wide receiver and would like to try and get it to Toney more.

What to expect at final home game of 2018 Season

It will be Florida’s last home game of the 2018 season and Idaho’s last game of their entire season. Mullen said that he knows the Vandals are going to bring their all to Ben Hill Griffin on Saturday because their team will have nothing they need to hold back.

Because of this, Mullen wants to make sure that his team is prepared for the challenge.

Kickoff for the game this Saturday against Idaho is set for 12 p.m.