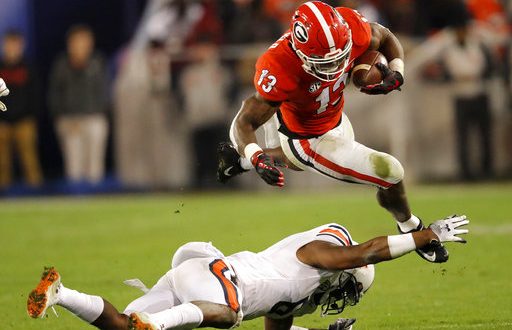 Georgia running back Elijah Holyfield (13) tries to keep his balance after colliding with Auburn defensive back Christian Tutt, bottom, during the second half of an NCAA college football game Saturday, Nov. 10, 2018, in Athens, Ga. (AP Photo/John Bazemore)

The fifth-ranked Georgia Bulldogs will host the UMass Minutemen as the two teams face off this Saturday in Athens.

Georgia (9-1, 7-1) has already secured the SEC East. The Bulldogs only loss this season came against SEC rival LSU. Georgia head coach Kirby Smart said his team is excited to take the field this week:

“We’re excited to get our second-to-last home game against UMass. Coach Whipple’s got a great program, a really good team that scores a lot of points,” Smart said. “I know our players are fired up to get another opportunity to play at home in front of our home crowd.”

Smart also talked about the matchup cornerback Deandre Baker faces in UMass’s Andy Isabella this week, saying he will be faced with a tough challenge.

Looking ahead, the Bulldogs will face top-ranked Alabama on Dec. 1 in the SEC Championship game.

Leading up to that matchup, Georgia will close out the regular season with a game this week against UMass and a rivalry matchup next week against Georgia Tech. The Bulldogs are coming off a stretch of impressive conference wins, beating Florida, Kentucky and Auburn. Smart said his team has been able to show resiliency and toughness throughout a stretch of difficult opponents.

UMass has faced struggles this season, entering Saturday’s matchup with a record of 4-7. The Minutemen have dropped three games straight two separate times this season. Their most recent loss came last week against BYU, where they lost by a score of 35-16. This weekend’s game will be the season finale for the Minutemen. Watch for a big performance from senior wide receiver Andy Isabella, arguably UMass’s most explosive playmaker.

This weekend’s meeting will be the first time these two teams face each other. Georgia and UMass will kick off Saturday’s game at 4 p.m. in Athens, GA. The game will be televised on SEC Network.

Born and raised at the ballpark! Typically quiet- until it comes to sports. I'm a South Florida native with a passion for baseball nearly as strong as my faith. Grew up in garnet + gold, turned out sporting orange + blue. Likely to be found with a camera. And yes, I take food pictures.
@victoriarossman
Previous Star Running Back Le’Veon Bell Ineligible for Rest of 2018 Season
Next Gators Look to Ride Momentum in Clash Against La Salle 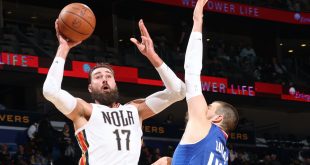 With one more western conference playoff spot up for grabs, the New Orleans Pelicans travel …