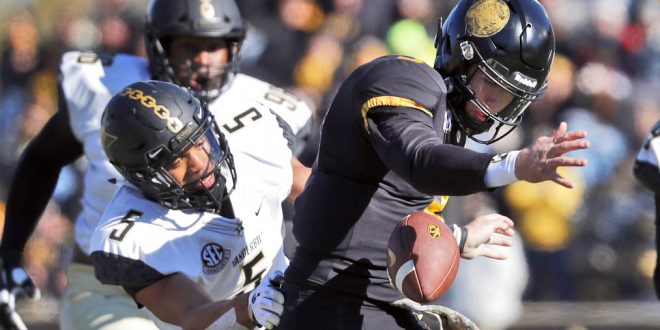 The 5-5 Ole Miss Rebels are set to take on the 4-6 Vanderbilt Commodores on Saturday. Both teams are coming off of losses last weekend, with Ole Miss losing to Texas A&M 38-24, and Vanderbilt losing to Mizzou 33-28.

Ole Miss struggled to keep possession of the ball for long periods of time. In the end, the Aggies had almost 15 more minutes with the ball than the Rebels. Part of the problem was Ole Miss’s inefficiency on third down, converting one of 11 opportunities.

Although Ole Miss’s Jordan Ta’amu threw for 373 yards, their run game was relatively ineffective with 67 total yards on 2.2 yards per carry.

The Aggies, on the other hand, rushed for 266 yards on 5.5 yards per carry. This allowed the Aggies to hold on to possession and slowly killed the game off.

Despite the loss, Ole Miss head coach Matt Luke is proud of his team’s ability to fight.

The Vanderbilt-Missouri game was statistically a much closer affair. The Tigers edged Vanderbilt in total yards 506 to 465. However, Vanderbilt intercepted the ball twice from senior quarterback Drew Lock.

Despite the Commodores’ efforts, Mizzou got the win thanks to a fourth-quarter touchdown with nine minutes left on the clock. As a result, the Tigers got their second consecutive win in SEC play, while the Commodores fell to 1-5 in the conference.

Vanderbilt head coach Derek Mason was happy with how his guys performed in the first half. However, they struggled to maintain their levels in the second half of play.

Mason is expecting a high-tempo style of offense from Ole Miss on Saturday. He believes that this will be the biggest challenge for the Commodores this weekend.

If Mason’s defense can limit Ole Miss’s run game as the Aggies did, Vanderbilt will have a decent chance of getting a result.

Vanderbilt and Ole Miss will kick off Saturday at 7:30 p.m. on the SEC Network.