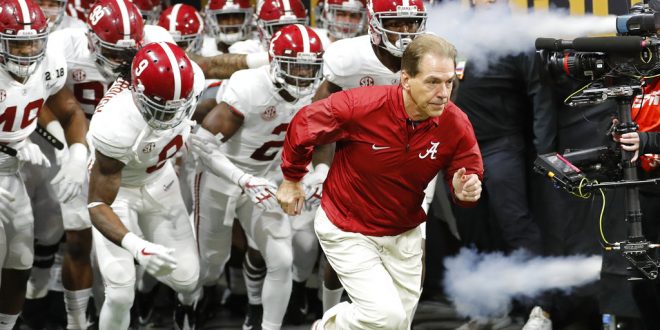 Alabama will get their final tune up game before they face the end of the season gauntlet. This weekend Alabama is one of eight SEC team to play an opponent outside the power five, when they play the Citadel this weekend.

“I don’t think anybody out there really understands the difficulty of scheduling we have, trying to get people to play,” Alabama head coach Nick Saban said.

Clicking on all Cylinders

This will serve as the final tune up for the Crimson Tide before they face the gauntlet down the stretch. As if they need a tune-up. The Crimson Tide is coming off back to back shutout wins for the first time in history.

This is the first time that @AlabamaFTBL has shut out AP-ranked opponents in back-to-back games in school history. pic.twitter.com/38F7ZFijoV

After defeating 7th ranked LSU and 21st ranked Mississippi State the Tide have one more game before they face Auburn, Georgia and the potential college football playoff field.

One of few questions coming into the matchup with Citadel this weekend is the health of quarterback Tua Tagovailoa. Tagovailoa was sacked six times through the first nine games. However, he was sacked four times last weekend versus Mississippi State. He left the game with an injury but Saban says he’s good to go for this weekend.

Saban was asked about Tua Tagovailoa's comfortability after getting banged up: "I think we gave up six sacks in nine games, so how banged up is he getting? … He got hurt earlier in the year. I think he's over that now."

Once in a Lifetime Chance

For the Citadel coaches and players, they know this is a once in a lifetime opportunity

“Obviously this is a very important football game for us for a lot of reasons. We want to go out there and have a great showing. We want to compete our butts off as best we possibly can on such a big and grand stage,” Citadel head coach Brent Thompson said.

According to oddshark.com the Crimson Tide are favored by 51 points. There have been 56 teams favored by 50+ points are 56-0 against the spread.

The Crimson Tide and Citadel will kick off at noon Eastern Time Saturday. The game will be broadcast on SEC Network.