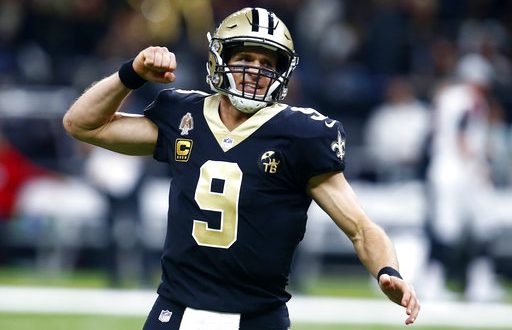 FILE - In this Nov. 22, 2018, file photo, New Orleans Saints quarterback Drew Brees reacts after throwing a touchdown pass during the first half of the team's NFL football game against the Atlanta Falcons in New Orleans. The record-setting quarterback will go for an 11th straight win after a season-opening loss, when the Saints visit the Dallas Cowboys on Thursday night. (AP Photo/Butch Dill, File)

TNF: Cowboys and Saints Both Look to Stay Atop Their Conferences

The Dallas Cowboys will host the New Orleans Saints in what should be an entertaining round of Thursday Night Football. The Cowboys are currently 6-5 on the season, but still tie the Redskins for the lead in the NFC East. The Saints are riding a 10-game winning streak after dropping the season opener.

New Orleans puts up dizzying offensive stats, while Dallas’ defense rarely allows other teams to reach the end-zone. But, this balance means the odds are even and either team could come out victorious.

America’s Team is holding teams to just 19.4 ppg, which is good for third-best in the league. It is not hard to see why the Cowboys are such a strong unit when taking its players into account.

However, stats mean nothing if they are not backed up when they matter most. This high-powered defense will need to live up to the hype and play one of the best games of the season to knock off one of the country’s most cohesive offenses. The Saints posted 45+ points in their last three games. Dallas possesses the talent to turn up the heat in Jerryworld. But, the pressure on the defense will cool if the group on the other side of the ball plays up to par.

Ever since the widely-publicized acquisition of Amari Cooper, Dallas’ offense is more quickly-paced. With Cooper running tighter routes, Dak Prescott find holes to show off the dual-threat abilities he has been praised for since college. This means that the Cowboys are able to amass more yards in a shorter amount of time, which means more scoring plays. For reference, Prescott to Cooper has resulted in three touchdowns and 349 yards since the latter landed in Dallas.

Running back Ezekiel Elliott is also doing more with the ball after Cooper lightened his load. Now, Elliott is running all over defenses with almost 161 ypg. Also, four percent of his touches end in a touchdown. It is easy to root for the Cowboys, as the team is managing to turn more playoff-bound every game. But, getting past the Saints is only something one team has been able to do all year.

New Orleans boasts two of Fantasy Football’s favorite (or least-favorite) players on the same side of the ball. Drew Brees continues to etch his name in the history books, breaking the record for passing yards and entering a four-man group of QBs with 500+ career passing touchdowns. His TD-INT ratio this season is also 29:2.

Alvin Kamara is only building off of his rookie season that garnered Offensive ROY and Pro-Bowl honors. The former SEC running back cleared 706 yards on 150 rushing attempts this season. He also has eleven rushing and four receiving touchdowns. To compare, Dallas’ Elliot has more yards (1074) but holds just six rushing and two receiving touchdowns. So, Kamara finds the end-zone in less yards, which should be difficult for the Cowboys to contain.

Bouncing off of that, New Orleans may not have the best defense in the NFL, but it gets the job done. The Saints hold opposing teams to just 3.6 yards per carry on the run and hold players behind the line of scrimmage 26.3 percent of the time.

Expect a matchup between 2018 Defensive ROY Marshon Lattimore and Amari Cooper. Lattimore posts an 83.1 passing rater against the opposing team this season. He might even do one of these again.

Former Gator Alex Anzalone is also doing great things for New Orleans and is getting better every week. In last week’s win over the Atlanta Falcons, Anzalone played 70 percent of the team’s defensive snaps… a team high.

Kickoff is set for 8:20 in Dallas tonight.