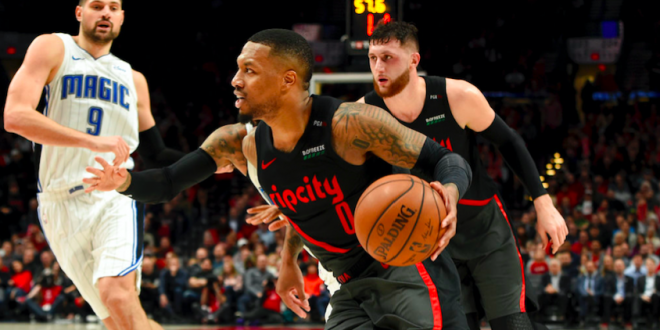 The Orlando Magic have been much improved this season, currently sitting at a 10-12 record. Being only two games below .500 would be seen as a success for the Magic given their recent years of struggling. Like every rebuilding franchise, however, they hit stumbling blocks along the way. And also just like any franchise, they are not immune to close game struggles. The Magic fell 115-112 to the Portland Trail Blazers on Wednesday night, November 28th. It was a game of massive swings, but the final one did not fall in Orlando’s favor.

A Back-and-Forth First Half

The Trail Blazers started fast out the gate and grabbed a small lead while the two teams continued to feel each other out. As it went on, Portland began to pull away even further. Damian Lillard setting a Portland franchise record for most three-pointers made in a single game certainly didn’t help the Magic. As things continued to settle in, however, the road team started to move the ball more consistently.

After a buzzer-beating three-pointer to end the first quarter, Orlando went on to dominate the second quarter. The Magic outscored the Trail Blazers 33 to 22 in the second quarter and rallied to take a halftime lead. It seemed like a much different Magic team. One that still had flaws, but was noticeably better, especially against higher quality teams. All the Magic needed to do was build on that momentum in the second half and catapult themselves out of a losing record.

Running out of Magic

The third quarter was a unique part of the game. The Magic came out and immediately built upon their lead. They led Portland by as much as 11 early in the third quarter, but only scored 21 points in all 12 minutes of playing time. Portland, meanwhile, scored 40 in the third quarter. Orlando’s lead was slowly cut down, and by the end of the quarter, Lillard’s record-setting threes and excellent rebounding gave the Trail Blazers a lead of their own. It was their largest one of the night at 11.

The team from Florida was unable to ever regain the lead after a huge Trail Blazers scoring run. They showed some signs of life, as a late fourth quarter scoring surge brought the game to the wire. The Magic outscored the Trail Blazers 28 to 20 in the fourth quarter and even tied it up at one point, but it was not enough.

Timeout on the floor in Portland:#PureMagic 106#RipCity 108

After a furious last-ditch effort, Orlando fell 115-112.  This is where the Magic need more experience and time in their quest to rebuild the franchise. Blowing out your opponents and avoiding getting blown out by opponents are both important parts of the game, but winning close games is just as important. If Orlando had won this game, their record would be even at 11-11. That reality does not exist anymore though, as the Magic are now two games below .5o0 instead of just one. If they want to start competing at a high level again, Orlando needs to pull out just a little bit more late-game magic for games like this one. Maybe then they can be on the better side. The winning side.

The Orlando Magic play the Phoenix Suns next on Friday, November 30th at 9:00 p.m.

The Portland Trail Blazers play the Denver Nuggets next on Friday, November 30th at 10:30 p.m.

@T_K_Williams
Previous Huskies gearing up for Pac-12 Championship battle
Next TNF: Cowboys and Saints Both Look to Stay Atop Their Conferences